Adults-only Seuss satire 'Who's Holiday!' is a comic showcase for Erin Cline 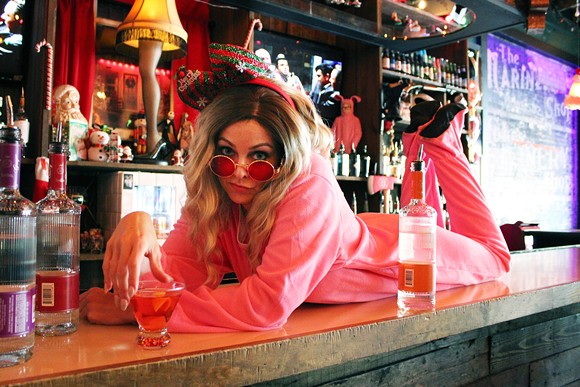 I recently referred to Dickens’s A Christmas Carol as our “secular scripture” of the holiday season, but Dr. Seuss’s How the Grinch Stole Christmas comes a close second. If simply reading the classic storybook isn’t enough, this year you’ll have three filmed versions to choose from: the 1966 Chuck Jones cartoon, the 2000 live-action Jim Carrey movie, and the new CGI reboot voiced by Benedict Cumberbatch. And here in Orlando, you can visit Universal’s Islands of Adventure for the Grinchmas musical stage show, a hybrid of the various versions scored by Mannheim Steamroller. But if all those festive “fahoo fores” leave you saying “feh,” you should follow a few Universal employees up OBT to the Footlight Theatre at the Parliament House, where Red Fish Theatre’s Who’s Holiday! is pulling back the curtain on what happened in Whoville after the roast beast was all eaten.

Penned by Matthew Lombardo (Tea at Five, Looped), Who’s Holiday! premiered off-Broadway last year after a publicized legal battle with the Seuss estate, which was ultimately decided in the R-rated parody’s favor. Dr. Geisel surely would have blown a gasket over the plot of this utterly unauthorized solo sequel, which catches up with Cindy-Lou Who – the adorable tyke whose love transformed the Grinch – after she’s grown up, been knocked up, and gotten locked up. Note to weak-stomached Seuss purists: If you thought Mike Myers' Cat in the Hat was nauseating, you’ll hurl when you hear about the Mean One’s giant schlong.

The play’s local debut becomes a one-woman showcase for Erin Cline, winner of the 2018 Orlando Fringe Critics Choice Award for Best Actress, and best known to theme park fans as “Chance” from Halloween Horror Nights. Under the direction of fellow Universal performer Adam Graham, Cline chain-smokes and pill-pops her way through an hour of rhyming couplets documenting Cindy-Lou’s debasement. Crack comic timing and enormous expressive eyes make Cline a perfect pick for the role; she’s capable of flipping instantly from outrageous humor to heartfelt emotion, as required by the shock-stocked but surprisingly smart script.

Graham, who also designed this production, creates a festively fetid environment featuring a video-projected picture window and an absent fourth wall, through which Cline can interactively assault her audience – be aware of flying hors d’oeuvres – although the venue's sound system and sightlines did the show few favors on opening night. The pacing, which is zippy from the punk-rock preshow on, unexpectedly dips shortly before the ending, and I found Cindy-Lou’s redneck dialect an unnecessary affectation (I always imagined Whos as more Minnesotan) but I’m not Grinchish enough to gripe over a few flaws. If you’re already sick of wholesome Who hash this season, Who’s Holiday! makes an ideal acid antidote to those “dahoo dores” doldrums.