Disney unveils new insanely lifelike animatronics, but it will be awhile before the technology comes to Orlando

There has been plenty of focus on the theme park arms race currently underway in Orlando, but another arms race is presently happening in Japan.

Tokyo Disney’s owner, Oriental Land Company, has its own attack plan that includes huge new additions to both of its theme parks, along with two new hotels. Japan, with a land mass roughly that of California, will be hosting both the 2020 Olympics in Tokyo, and the 2025 World Expo in Osaka.

Tokyo Disney is preparing for significant expansions that will see new additions throughout the early 2020s benefiting from the expected influx of visitors to the already highly populated nation. In the Disneyland park, both Tomorrowland and Fantasyland will be receiving updates as part of a $656 million investment. The flagship attraction of this expansion is a Beauty and the Beast mini-land with a unique dark ride, which will be the first for the iconic cartoon.

Less than two weeks after Osaka was announced as the host city for World Expo 2025, and just one week after a second new hotel was confirmed for the resort, Tokyo Disney sent shockwaves across the internet when it, in collaboration with Disney itself, released a video showing the next generation animatronics that will be used in the new high-tech Beauty and the Beast dark ride.
Disney Imagineering, who is overseeing the new additions, have developed what will be the next signature ride system for Disney parks. Ratatouille and Mystic Manor, both with six seats, are Disney’s first truly modern, autonomous trackless ride systems. This first-generation system will likely be what Disney chooses to use on Epcot’s upcoming Ratatouille ride. A larger capacity and slightly reworked 8 passenger ride vehicle will be used on the upcoming Star Wars: Rise of the Resistance ride.

Now Disney has unveiled its largest modern trackless ride vehicle. Seating nine passengers, four in the front row and five in the back row, the Beauty and the Beast ride vehicles will interact with each other, spinning and dancing, in large stunningly detailed show scenes. While no manufacturer has been officially announced, numerous aspects of the new ride vehicles point to Oceaneering; the same company behind the trackless ride vehicles used on the Antarctica ride at SeaWorld Orlando.

While the massive ride vehicles are impressive enough, Disney also debuted what looks to be a brand-new generation of audio-animatronics. Gone are the interior lit, projection mapped faces that have been used on recent animatronics, such as those in Seven Dwarfs Mine Train and Frozen Ever After. The smooth, non-stop movement seen in Pandora’s Na’vi River Journey has been kicked up a notch with multiple animatronics.

Since debuting in Animal Kingdom’s Pandora expansion last year, Disney has shown off the cutting edge Na’vi figure in multiple tech conventions and events. With the openness to share the numerous advancements that Disney had made via the Na’vi animatronics, it is clear that the company has moved on to some new, even advanced technology. With insane fluidity of motion and nearly photo-like realization, the new Beauty and the Beast characters point to new uses of the Na’vi technology.

It might be this same generation of animatronics that Disney plans to use in the upcoming Rise of the Resistance ride, which is expected to house dozens of animatronics in a high-tech attraction which will also feature screens and possibly even augmented reality style projection glass technology. 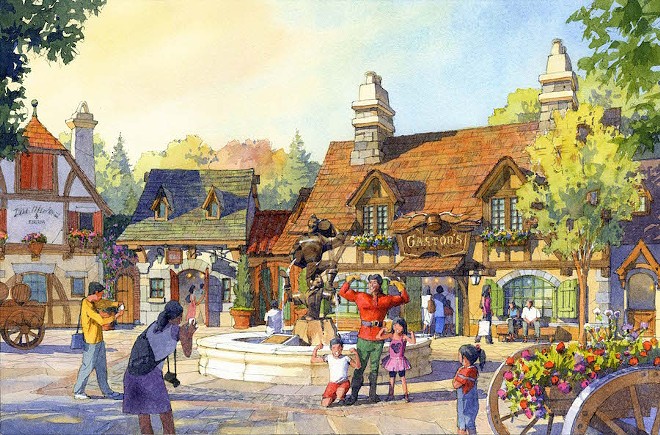 Back in Japan, the new Beauty and the Beast mini-land will draw a lot of inspiration from Orlando’s New Fantasyland version. The meet-and-greet and restaurant found in the Magic Kingdom version have been replaced with the large, indoor dark ride. A Gaston’s Tavern restaurant and a separate LeFou’s food counter along with three small retail stores round out the mini-land.

Some have speculated that Disney may eventually bring the high-tech Beauty and the Beast dark ride to Walt Disney World, but typically new attractions in the franchised or co-owned Asian resorts include an exclusivity agreement for at least five years. The previously co-owned Disneyland Paris resort had a similar contract with its Ratatouille ride. That ride will see its five-year anniversary in July of 2019, just a few months ahead of the Epcot version’s opening. One of the few remaining expansion areas for the Magic Kingdom is directly behind Fantasyland, the most obvious place for the ride at Walt Disney World.

Again though, with multiple investments in the park ahead of the 50th Anniversary in 2021, including the addition of the Tron-themed roller coaster, any significant new attraction likely wouldn’t be until much later, possibly not until the late 2020s at the earliest.

The Gist Beauty and the Beast Disney Walt Disney World