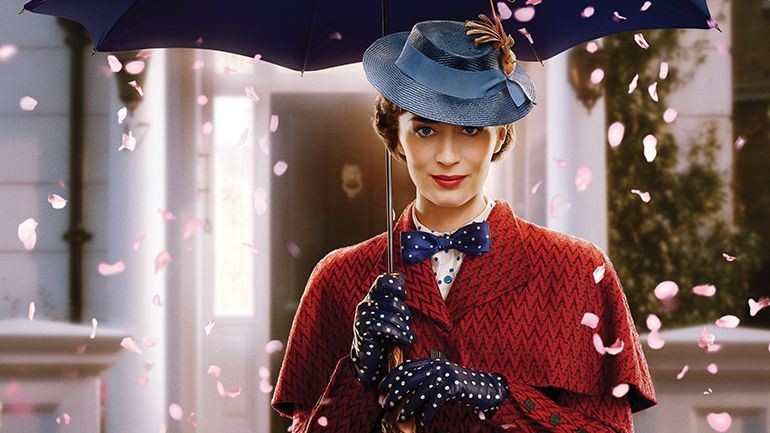 When asked for a sequel to one of his popular films, Walt Disney famously replied, “You can’t top pigs with pigs.” The suits currently running his namesake studio certainly never got that memo, because for the past decade we’ve been subjected an endless parade of revisionist reimaginings (Maleficent, Alice in Wonderland, Christopher Robin) and CGI-saturated “live action” remakes (Cinderella, Jungle Book, Beauty and the Beast) inspired by Disney classics, which have ranged in quality from “harmless but unnecessary” to “deeply unfortunate.” So when winds in the east brought word of a followup to the movie most historians consider Walt’s crowning achievement, fans naturally feared “what's to happen all happened before.” Fortunately, Mary Poppins Returns turns out to be a practically perfect companion piece that not only honors the spirit of the hallowed original, but even improves on it in some important ways.

Set two decades after the Edwardian events depicted in the 1964 movie musical and 2003 stage play, Mary Poppins Returns stars Emily Blunt as the titular magical nanny, ably filling Julie Andrews’s iconic pearly boots. England is in the midst of the “Great Slump,” and the now grown-up Banks children – harried widower Michael (Ben Whishaw) and his plucky sister Jane (Emily Mortimer) – are about to be evicted from their family home on Cherry Tree Lane by a duplicitous banker (Colin Firth). Just in the nick of time, Poppins swoops out of a storm cloud and sets things straight through surreal songs, with a little assistance from her old flame Bert’s lamp-lighting protégé, Jack (Lin-Manuel Miranda).

David Magee’s episodic screenplay, which pieces together stand-alone stories found in author P.L. Travers’s little-remembered later novels, follows the original’s blueprint with welcome callbacks to tuppence and codfish, adding emotional depth to the characters without injecting cynicism. Michael’s mourning makes him a much more empathetic protagonist than his over-privileged pop was, and Jane’s labor activism is portrayed as positive, whereas her suffragette mom was the object of humor.

The inclusion of a clear antagonist also adds urgency, giving the sequel a far peppier pace than the intermittently pokey original. And when the climax briefly threatens to become an overblown action extravaganza, Poppins’s wit neatly undercuts it.

It’s easy to see the parallels between beloved musical sequences from the original and this one; the chimney sweeps’ rooftop leaps have become “leeries” launching off lampposts, and the kite-flying finale is now a hymn to helium balloons. The self-conscious echoes occasionally become unflattering, such as an extended upside-down Meryl Streep cameo that isn’t nearly as entertaining as the similar sequence starring Ed “Uncle Albert” Wynn. But for the most part, the original songs by Marc Shaiman and Scott Wittman (Hairspray) have heartfelt lyrics and hummable tunes that sound like lost gems by the Sherman Brothers, whose classic compositions are cleverly woven into the background score. Better yet, director and co-choreographer Rob Marshall (Chicago) presents the dance numbers with old-fashioned long takes and wide angles, instead of the quick cuts and closeups that ruin modern musicals like The Greatest Showman.

No performers could erase the memory of Andrews and Dick Van Dyke, who makes an 11th-hour appearance that had my audience of critics cheering and crying. But Blunt’s brusque yet beatific incarnation of the character is spit-spot on, and though Miranda’s character doesn’t have the same chemistry with Blunt’s (his eye’s on Mortimer), his Cockney accent is vastly better than Van Dyke’s, and he even gets to perform a period-appropriate rap during the hand-animated music hall scene that is the production’s peak. I wouldn’t have predicted a worthy successor was possible, but Mary Poppins Returns is so supercalifragilisticexpialidocious, even the infamously disapproving Travers herself might have admitted enjoying it. Maybe.