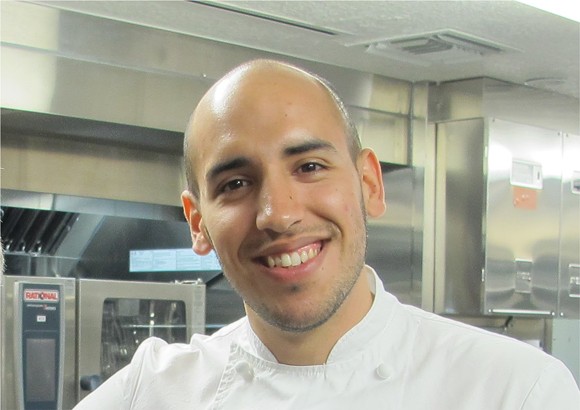 Velasco will fashion his final meal on Christmas Eve before taking on the role as chef de cuisine at the Ravenous Pig, where he'll oversee lunch and brunch operations.

Current chef de cuisine Nick Sierputowski will handle dinner and, along with chef-owners James and Julie Petrakis, continue to be the driving force in the kitchen.

"This has been a really cool, collaborative and healthy transition," says Velasco, "and they're excited to have one more creative mind in the mix."

It's a major coup for one of best restaurants in Orlando. They've now assembled a dream team of culinarians, along with general manager and sommelier Scott Geisler, who left the Pig in 2015 to join the team at 1921, only to leave in April of last year to rejoin the Pig.

Geisler says they've wanted to make the Pig's lunch program a major focus in the new year and, according to Velasco, the Petrakises will give him the leeway to really showcase his creativity.

"We couldn’t be more pleased to welcome Camilo Velasco as our lunch chef de cuisine," said James Petrakis in a release. "We will place a large emphasis on our midday dining program in the year ahead and are excited to have him lead this charge. Chef Nick and chef Camilo will make a great tag team in the kitchen and we couldn’t be happier to welcome him as our newest addition to The Ravenous Pig family."

No doubt without Velasco and Van Aken's input, the menu at 1921 will take on a different complexion – although, according to a representative of the restaurant, they'll "continue to serve locally sourced and seasonal dishes, making menu changes to reflect current harvests and sustainable ingredients."