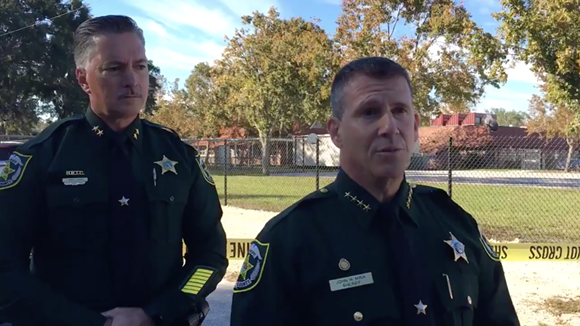 A 15-year-old boy was shot and killed while on his way to Boone High School in Orlando early Tuesday morning.

Orange County Sheriff John Mina says around 6:30 a.m., deputies responded to a call of shots fired near Waldo Street and East Kaley Avenue, less than a mile from the high school.

When they arrived, they found the boy with gunshot wounds and treated him at the scene. The teenager was taken to the hospital, where he was later pronounced dead.

Mina says the boy was a student at Boone High School who lived in the neighborhood where he was killed.

"We believe he was alone," Mina says. "Neighbors did hear the gunshots and then called us, but right now, no witnesses to the actual shooting have come forward. We're asking anyone who saw or heard anything to call the Orange County Sheriff's Office or Crimeline and report any suspicious activity that happened in this area."


Boone High School Principal Dusty Johns says a crisis team will be on the school campus to provide counseling, as well as additional law enforcement.

"We were made aware by law enforcement that early this morning one of our students was tragically killed on the way to school," Johns wrote on Facebook. "Our thoughts and prayers are with the family as they go through this extremely difficult time. Your child may speak with you and share this sad news. Students will have varied reactions to the death of a peer. Any reaction is normal in the grief process and I encourage you to openly discuss with your child their feelings and reactions. … The safety and well-being of our students is my top priority."

UPDATE: The 15-year-old boy shot and killed Tuesday morning on his way to Boone High School has been identified as Alejandro Vargas Martinez.

"Certainly the death of a child – a 15-year-old – is extremely tragic and to happen one week before Christmas, I can't imagine how the parents are feeling right now," Orange County Sheriff John Mina says.

Anyone with information is urged to contact the Crimeline hotline at 800-423-TIPS.