Arby's, a fast food chain that famously and unapologetically "has the meats," is apparently a difficult place to rob, especially if you're an absolute dolt.

Last month, a bold yet bumbling doofus attempted and failed to pull off the biggest heist in the history of Seminole County. Yes, someone tried to rob the Casselberry Arby's.

On Dec. 26, the unmasked suspect broke into the Arby's, located at 1436 State Road 436 next to Ross Dress for Less, and for four straight hours managed to completely botch the heist in every way possible.

According to the Casselberry Police Department, the suspect entered the Arby's at around 1:50 a.m. After disabling the security system, he then left the store, returned hours later with a blowtorch, and then attempted to bust open the safe until he eventually gave up at around 6 a.m.

"It's a little out of the ordinary," said Casselberry Police Commander William Nas to WKMG. "A lot of times, we get someone who will run out with a cash register or a smash-and-grab and take off, but to spend time in there to try to break into the safe is intense."

Authorities believe the suspect, described as a "possibly hispanic light skinned male," is the same guy who used a blowtorch to steal $1,600 from the safe at the Altamonte Springs Chipotle back in July.

Of course, now media outlets are calling him the "Blowtorch Burglar," which is an undeserved nickname, because it sounds cool and this guy isn't. Sorry, but this dumbskull deserves no glory for sucking at robbing an Arby's. Not only did he not have a mask, but he didn't even think to bring the damn blowtorch, even after the Chipotle job.

Anyway, do you know this guy? Do you know anyone dumb enough to spend four hours laboring away inside an Arby's for a negligible amount of cash, and not even leave with a Classic Beef 'N Cheddar?

Send any hot tips to either the Casselberry or Altamonte Springs police departments, or call the Crimeline at 1-800-423-TIPS. 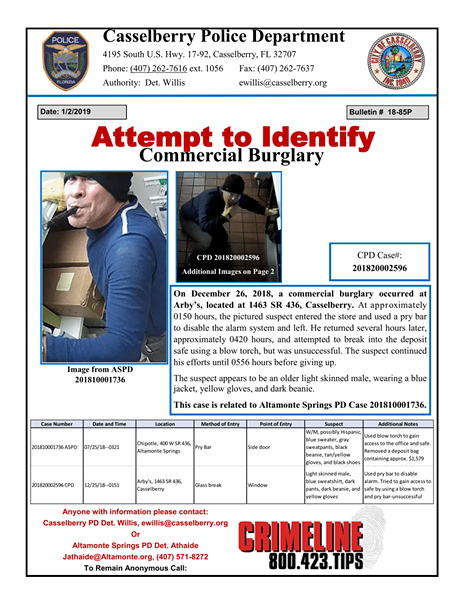