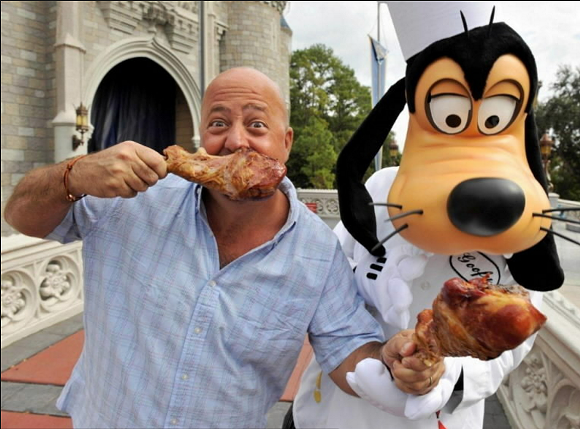 Roughly six months after saying, "You’re kinda screwed …" when it comes to dining in Orlando, "but there is some good BBQ there at 3 rivers and Ravenous Pig," food critic and television personality Andrew Zimmern will finally air his Orlando-centered episode of the Travel Channel's Zimmern List.

Last June, Zimmern's comments on Twitter set off the local restaurant community, including Orlando Weekly's food critic Faiyaz Kara, who reminded the celeb chef that Orlando is an actual city, with actual restaurants. "We have a thriving downtown core teeming with boîtes and bars. We've got suburban enclaves full of gems in which to gorge. We've got chefs in bedroom communities who'll leave you floored by their exceptional cooking skills," vented Kara, in his piece "Hey out-of-town dumbasses, Orlando actually has great restaurants."

After a Twitter mea culpa, Zimmern later returned to Orlando to make good on trying everything the City Beautiful has to offer. (Weak, because he'd been here before and tried the Ravenous Pig, Lineage and other local highlights.) Now, Zimmern List: Orlando will make its big debut on Saturday, Feb. 2, at 10 a.m. ET on the Travel Channel.

"After getting called out on Twitter for saying 'You're kinda screwed …' in terms of where to eat in town, Andrew heads to Orlando, FL, to discover the incredibly rich food scene that's often left in the shadow of Disney World," says the episode description.

The Travel Channel hasn't released the full list of restaurants that Zimmern will feature in the episode, but you can bet your turkey legs Domu and Black Rooster will probably make an appearance.

Zimmern recently got into even more hot water for saying that Chinese food in the Midwest is served in "horses–t restaurants." Looks like there may be yet another apology episode coming up.