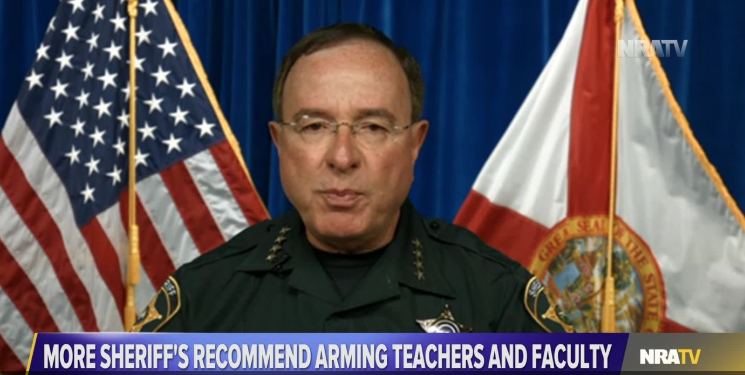 Following the release of a 458-page report by a state panel that investigated the February 2018 mass shooting at Marjory Stoneman Douglas High School in Parkland, two Florida sheriffs appeared on NRA TV to advocate for the deeply unpopular stance of arming classroom teachers.

Polk County Sheriff Grady Judd, a member of the Parkland commission, and Pinellas County Sheriff Bob Gualtieri, the commission's chair, both made separate appearances on the Internet channel late last week in an attempt to "sell the idea of arming teachers," says Fred Guttenberg, a gun control activist and father of Jaime Guttenberg, one of the 17 Parkland casualties.

As Guttenberg told the Miami Herald over the weekend: "NRA TV is the online propaganda arm of a gun lobby group whose goal is to support gun manufacturers and sell more guns. And so they didn't just go on NRA TV to try and sell this conclusion that they came to after hearing all this testimony. They've been going to NRA TV all the way through the process of the commission hearings, going back months, specifically Grady Judd. He is clear he came into this commission process with this as his mindset. And, if you look at the video, he brags about changing Gualtieri's mind about this."

What is it with the Florida Sheriff's who served on the MSD Commission and fight for arming teachers going o NRATV to push this? https://t.co/qiDCVunKVi via @nratv

Guttenberg adds: "To go on this gun lobby propaganda network to sell an agenda that they came into this commission hearing with is a slap in the face and discredits in so many ways the great work they did as an investigatory body who dug into what happened and who failed and who needs to be held accountable. They did their job but they did not look at the role of guns. To come out with a recommendation on guns they did not take testimony on, whether it's a good idea or a bad idea, it is very concerning to me."

On the NRA TV program, as part of his argument to arm classroom teachers, Judd referenced the fact that one of the 17 casualties in the Parkland shooting was a classroom teacher. Judd told host Grant Stinchfield that before the teacher was fatally wounded, he "would have shot the active shooter had he a firearm" and "would have saved his students."

Though many Parkland victim family members and some members of the investigatory commission have maintained their stance against arming classroom teachers, the report did recommend one remedy, among a number of others, that state law should be amended to allow certain qualified, trained teachers to carry firearms on the job.

Even so, the Florida Education Association has voiced their adamant opposition to such a measure, as has the Florida PTA.