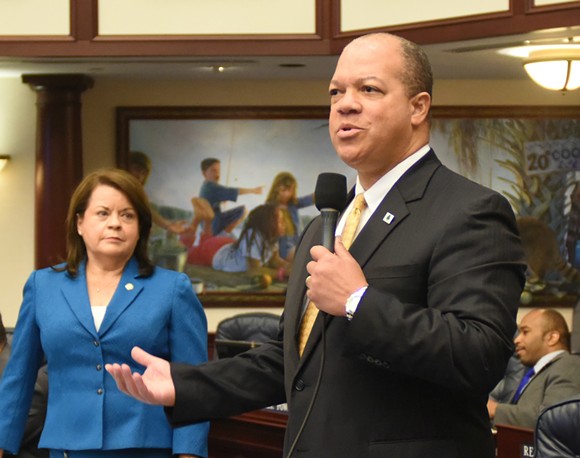 Almost a year after 17 students and teachers were shot to death at Marjory Stoneman Douglas High School, a Florida lawmaker has filed a bill to repeal the gun restrictions enacted after the massacre.

State Rep. Walter Bryan "Mike" Hill , R-Pensacola, has filed HB 175, a proposal that essentially revokes many of the gun-control provisions passed in the Marjory Stoneman Douglas High School Public Safety Act. Among other things, the act raised the statewide minimum age to purchase a rifle from 18 to 21, banned bump stocks and required a three-day waiting period for all purchases of rifles and other long guns.

The bill would lower the minimum age to purchase a rifle back to 18 and re-legalize bump stocks, a device recently banned by the Trump administration that allows a semiautomatic weapon to fire faster. The measure would also eliminate the three-day waiting period for semiautomatic weapons, rifles and other firearms not classified as "handguns."

The Pensacola Republican also wants to remove a provision that lets law enforcement officers temporarily seize guns and ammunition from people they take into custody if they pose credible danger to themselves or others. A recent investigation by the Miami New Times found that out of 108 "risk-protection order" cases filed in Broward between last March and July, 28 cases involved people accused of domestic violence; 45 involved people with mental illnesses; and 34 cases were relayed to people considering suicide.

Parkland student survivor David Hogg said Hill's attempt to weaken the laws in Florida would be "an absolute fucking disaster."


Orlando Weekly has reached out to Hill for comment, and we will update this story when he responds.