Fringe Winter Mini-Fest reviews: "You Belong Here" and "The Asylum of Doctor Moreau"

Master monologist Martin Dockery has been bringing his tangled tales of acid-soaked bicycle trips, religious theme parks, and radioactive fallout zones, to Orlando Fringe for a decade. This latest one-man marvel takes audiences along on his most dangerous journey yet: fatherhood.

Dockery arrives appearing unusually dapper in a suit and tie, clutching a coffee mug and an impressive-looking stack of reference books, but don’t be fooled; his manic, full-body delivery is delightfully disheveled as ever. Of course, with Dockery nothing is ever explored in a simple straight line, so this show starts with an intentionally frustrating series of ever-expanding introductions. Those eventually dovetail into an equally repetitive recounting of Martin’s misguided attempt to enjoy an audio tour of Beijing's Forbidden City. And before he even gets there, you’ll delve into hysterically off-kilter observations about flying movie theaters, cargo pants and the sunnier side of the Chinese police state.

The disparate threads don’t tie up quite as neatly here as in some of his previous scripts, but life itself is messy and chaotic, especially when you’ve got a newborn. With some sharpening, this brand-new script could someday stand with Dockery’s best works, and if you “lower your expectations” (as he asks up front) longtime fans will be far from disappointed. Last Show: Sunday, Jan 13. at 7 p.m. Click here for tickets. 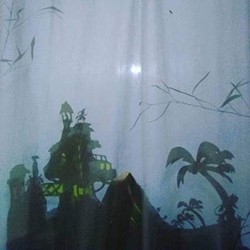 The Asylum of Doctor Moreau

“The Encampment of Dr. Moreau” was one of the last productions I saw during the 2018 Fringe, and while it came too late in my schedule for a formal review, it made enough of an impression for Matt Palm and I to award it the Critic’s Choice prize for Best Drama. So I’m delighted to see the show (albeit under an altered title and with one fewer performer) return for the Mini-Fest; better yet, it’s moved from an open-air tent in the courtyard to a proper indoor venue, sacrificing some immersive atmosphere for welcome warmth and improved lighting.

The play faithfully follows H. G. Wells’s 1895 novel “The Island of Doctor Moreau,” drawing much of its text from the seminal horror/sci-fi classic. Marlon Andrew Burnley (2017’s best male actor for “Black in a Box”) plays Pendrick, the shell-shocked shipwreck survivor trapped on an island full of humanoid beasts; John Terry takes on most of the other roles, including the titular sadistic scientist and his alcoholic assistant Montgomery. The twist is that the tale is told using shadow puppets, primitive projections, and even a Muppet Moreau, adding an additional layer of surrealism to an already infamously disturbing story.

Terry transforms himself into terrifying creatures – both human and animal – with little more than an eyepatch and length of chain; Burnley brandishes his flashlight like a seppuku sword, stabbing his own soul in sympathetic anguish with the isle’s damned inhabitants. Their impressive physical performances are matched by an improved script, which wisely jettisoned some jarring comedy since last spring. The reduction from three performers to two made some sections of overlapping dialogue excessively confusing, so I’m thrilled to learn the show will return again to May’s full Fest with (potentially) a cast of four.