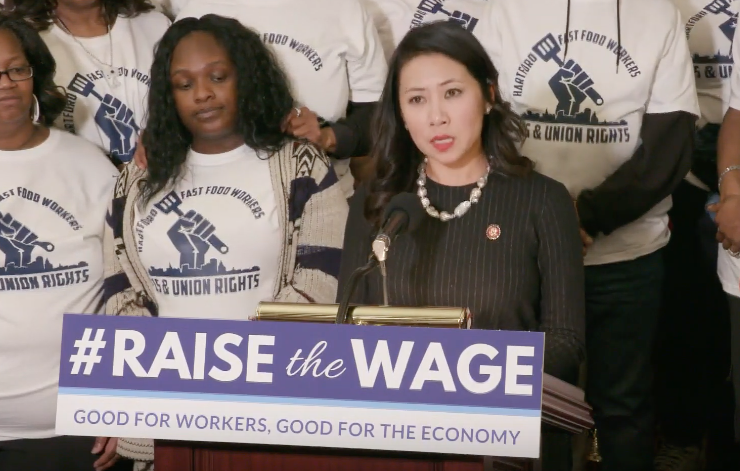 Led by Democrats Bernie Sanders and House Committee on Education and Labor Chairman Bobby Scott, the "Raise the Wage Act of 2019" would essentially boost the minimum wage to $15 per hour by 2024 through annual increases, as well as end provisions allowing employers to pay workers under the age of 20, tipped workers, and employees with disabilities less than the wage floor.

This year, Florida’s state minimum wage was increased from $8.25 an hour to $8.46 an hour. To put this increase into perspective, the 21 cent boost adds an extra $437 annually, and brings the annual income of a family of four to $17,597 before taxes, which is far below the federal poverty level of $25,100.

"Over the last decade, most working families have seen an increase in the cost of almost everything they need, yet their wages have barely moved," said Murphy in a statement. "No person who has the dignity of a full-time job should face the indignity of not being able to provide for themselves and their loved ones. This bill will finally give hardworking families in central Florida a much-needed raise—putting more money in their pockets to spend at small businesses and helping to grow our economy for everyone."


Sanders, who has introduced similar versions of this bill over the last two years, also commented on the act.

"Just a few short years ago, we were told that raising the minimum wage to $15 an hour was 'radical,'" Sanders said. "But a grassroots movement of millions of workers throughout this country refused to take 'no' for an answer. It is not a radical idea to say a job should lift you out of poverty, not keep you in it. The current $7.25 an hour federal minimum wage is a starvation wage. It must be increased to a living wage of $15 an hour."

Orlando attorney John Morgan, who is leading the Florida For a Fair Wage campaign to raise the state minimum to $15 an hour gradually by 2026, also recently agreed to pay his own employees $15 an hour following criticism from Orlando Weekly.

While the bill, which is surprisingly backed by House Speaker Nancy Pelosi and Senate Majority Leader Chuck Schumer, will likely pass the Democrat-controlled House, it will certainly face a brutal battle in the Republican-led Senate, and it has an even slimmer chance to get a signature at the president’s desk.