The federal government might be shut down, but our Florida state representatives Anna Eskamani and Carlos Guillermo Smith were still hard at work yesterday afternoon, hosting a town hall discussion with local arts leaders at the Orlando REP, and delivering a passionate call-to-action supporting the full restoration of cultural funding from Tallahassee.

Reps. Eskamani and Smith were introduced on Jan. 15 to a theater of arts supporters by the REP's development director Vicki Landon, and Central Florida Community Arts founder Joshua Vickery, who helped organize the afternoon event. Eskamani and Smith were joined by other elected officials, including Sen. Geraldine Thompson and Rep. Amy Mercado, along with administrators from important Orlando arts organizations. 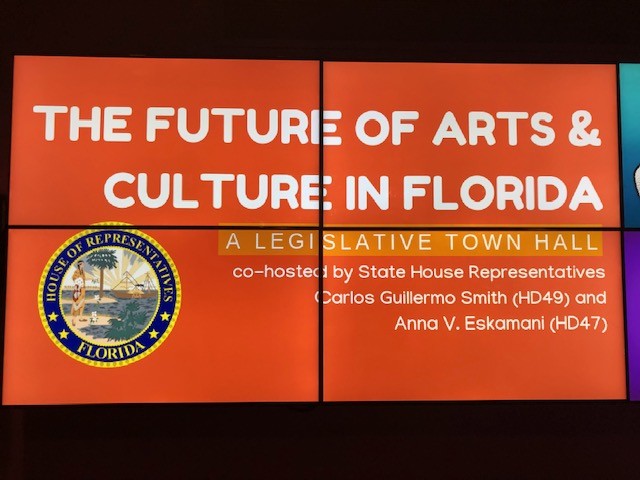 While the event's title, "The Future of Arts & Culture in Florida," covers a wide range of topics, the central subject under discussion was the 94% cut in matching grants from the Florida Department of State Division of Cultural Affairs (DCA) in the current funding year. Handouts prepared by the Florida Cultural Alliance detailed how DCA grand funding has dropped from $3.12 million in 2014-2015 to only $229,227 in 2018-2019. These steep cuts have occurred despite studies demonstrating that every $1 invested in cultural nonprofits results in $9 returned to state and local government treasuries. The purpose of the town hall was to allow arts leaders from a few of Orange County's 4,284 arts-related businesses detail the direct impact these reductions have had on their efforts, so that the representatives in attendance could take their stories back to their fellow legislators. 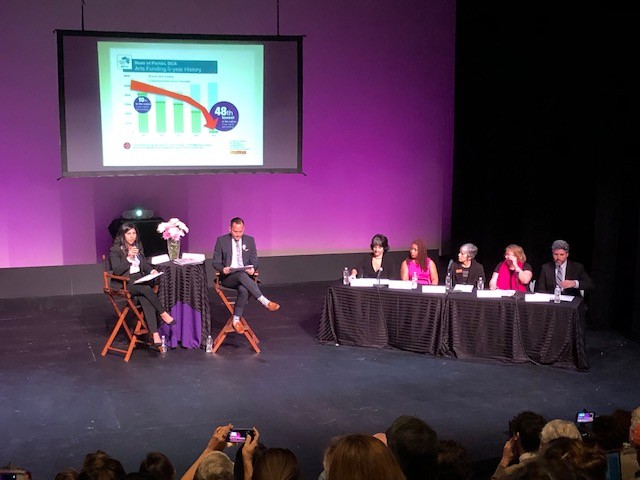 Here are a few highlights from the presentation:

Pam Kancher, executive director, Holocaust Memorial Resource & Education Center of Florida
"We had no choice but to eliminate an entire exhibit and three months of parallel programs that would have supported the exhibit. "Stolen Heart: The Theft of Jewish Property in Berlin's Historic Center," which opened in 2013 in Berlin's State Museum, would have been the centerpiece of our cultural season, and to date one of the most expensive exhibits ever planned to bring to our community...Unfortunately, the timing of the grant announcement didn't allow us time to secure additional funding, and so the exhibit was canceled...I can't help but wonder what if."

Heidi Evans Waldron, executive director, Florida Symphony Youth Orchestras
"In last year's funding, we qualified for $46,100; in our category we were rated second. We received $3,081, unfortunately...Our mission is to make sure our students are never impacted by cuts like this [but] a very small cut in the budget can impact a medium-sized organization, to set plans and progress back, which could overall impact hundreds of students over the years."

Mitzi Maxwell, executive director, Mad Cow Theatre
"We've done our part in growing our organizations. The economic impacts that were teeny-tiny, today we have impacts of over $2 million in the central Florida area, and we retain and hire over 200 artists each year...For a long period of time, the funding for the arts was incredibly stable because we had dedicated funding...I really hope that there is a way for us to stabilize the funding in central Florida, because we have all contributed mightily, as have patrons around the state. I think we have some skin in the game, and we're worthy, so let's make something happen."

JoAnn Newman, president and CEO, Orlando Science Center
"The state DCA grant process is rigorous and extensive...We estimated about 80 hours worth of staff time invested to just put your name in the hat [for DCA grant funding]. We got scored and vetted, we had a very high score, and were eligible for the full funding of $150,000. We got $9,000. So we're doing the work of a full-fledged application...it puts a huge additional burden on the staff, because we've already set our budget in place."

Elizabeth Thompson, executive director, Wells' Built Museum
"The most impactful way [funding cuts affect us] in my opinion is the decreased ability to offer programming to the community. On this day, the birthday of Dr. Martin Luther King, Jr., we are in a position where we're evaluating whether we can have an MLK program, because we don't have the funding. Last year we were able to offer more than 10 event programs, and this year we are looking at about three. That's a shame because it reduces access to the central Florida and visiting community...To be able to celebrate diversity, to be able to inform and educate about the contributions that African-Americans and people of color have made: if we aren't able to do it, then who will?"

Christopher Barton, executive director, Orlando Philharmonic
"We really in this county have a remarkable school system that believes in art experiences and art education for every single student...We have 47,000 students who came through [the Philharmonic's] young people's concerts this last fall. We do that as a partner to the school system, and only a healthy arts organization can be a healthy and strong partner...The stability and strength and growth is what allows us to be good educational partners. I moved here from Arizona a few years ago; not a shining example of progressive policy or arts funding out there in the beautiful Southwest, but doing quite a bit better than Florida is right now. I managed an orchestra out there that had an operating budget about one-tenth the size of the Orlando Philharmonic, and we could count on the state of Arizona for $40,000 of support. This year, on that much larger budget and with a much larger impact and ambition that we have as central Florida's professional orchestra, we received a grant of about $10,000. I think we have an opportunity as the great state of Florida, with staggering population growth, to really set an example for the rest of the country."

Flora Maria Garcia, president and CEO, United Arts of Central Florida
"Where there's a political will and the people's will, there will be a way to make this happen. Together, we have to make this happen, because we have to find a way to stabilize funding for our arts and cultural organizations. When I was director of the Missouri state arts council we created a $100 million cultural trust that was publicly funded, built over a ten year time frame, that was matched by private sector money...In Atlanta, we worked on dedicated revenue stream legislation that was called the 'fractional tax'...There's so many creative ways that we could explore here in Florida."

Reps. Eskamani and Smith closed the event with a call to action, encouraging the audience to contact their legislators, and attend the Arts & Culture advocacy day at the state capitol in Tallahassee on March 13. The objective is to get full funding for the $61 in DCA grants that have already be vetted and approved for the current fiscal year.

"We've heard excuses from lawmakers about why funding fell of a cliff," says Smith. "The state budget has always been a values document. What are the values of our state leaders, the people we elect to the legislature? Well, you can tell what their values are by looking at the budget. I'm committed to continue fighting for arts and cultural funding because I know the powerful impact it has on our community. In this last legislative session I looked at that budget, and I voted no, because it didn't match the values that I personally hold, and the values that my constituents sent me to uphold."

"Art transcends values and time in a way nothing else does," Eskamani concluded. "Art tells stories and helps you get into someone else's shoes...That's why this work matters, and that's why we ground ourselves in its importance."