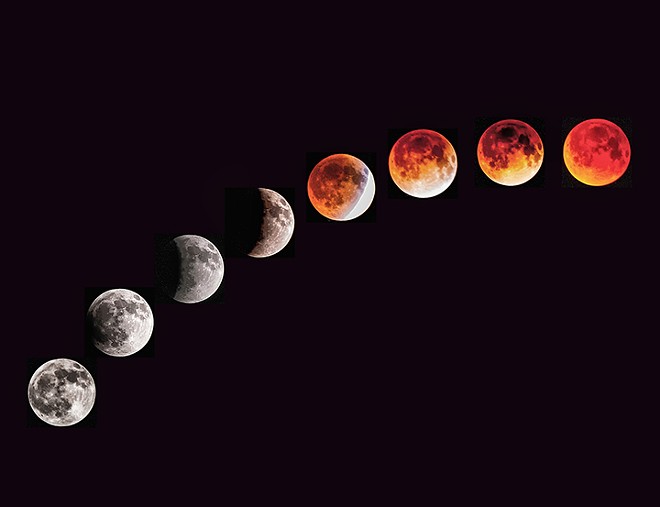 All week the Central Florida Astronomical Society has been celebrating Moon Week, and Sunday’s culmination is this viewing party in honor of the SUPER BLOOD WOLF MOON! The scientific name is a “total lunar eclipse” – but at totality, the Earth casts a reddish shadow on the moon, which is why it gets called a blood moon; this eclipse also falls during the first supermoon (a full moon that falls on or near perigee and thus appears larger and brighter than usual) of 2019; and of course, January's full moon is known colloquially as the Wolf Moon.

All of which is to say that what you're getting is a SUPER BLOOD WOLF MOON, which sounds much cooler than “total lunar eclipse,” just saying.

The star-studded celebration takes place on the terrace of Seminole State College’s McGee student center, adjacent to the Emil Buehler Planetarium. There will be food trucks as well as an “astrophotography” station for anyone interested in taking a photo of the eclipse with their phone; photographers with DSLRs are also welcome. In addition to the SUPER BLOOD WOLF MOON, attendees can expect to see other celestial spectacles like nebulae (gaseous clouds of space dust) and star clusters.

And it may be a late night for a Sunday (the eclipse starts at 9:36 p.m. and ends at 12:43 a.m.), but students and employees of woke companies will have Monday – Martin Luther King Jr. Day – off, so have no worries about staying up late howling at the SUPER BLOOD WOLF MOON.