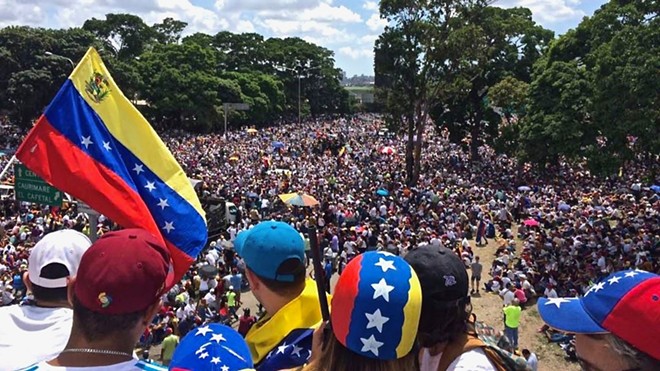 Both Florida lawmakers say the regime of President Nicolás Maduro has "perpetrated egregious human rights abuses and corrupted Venezuela’s once democratic institutions, leading to an economic, humanitarian, and security crisis and forcing millions of Venezuelans to seek refuge abroad," according to a news release. United Nations officials estimated in November that the number of Venezuelan refugees who fled their country was about 3 million people.

Under the bill proposed by Soto, D-Orlando, and Díaz-Balart, R-Miami,  Venezuelans would be allowed to legally stay in the U.S. and be shielded from deportation. They would also be granted work permits and be allowed to travel abroad for emergencies and extenuating circumstances.

In a statement, Soto says Maduro has "only brought suffering and despair to the people of Venezuela."

"During Maduro’s tyrannical rule, Venezuela’s economy has deteriorated at alarming rates, causing a scarcity of basic foods and medicine in the country," Soto says. "The whole world has witnessed Maduro’s blatant disregard for human rights, including arbitrary arrests, media censorship, imprisonment of the opposition, and the use of lethal force against peaceful protesters. For these reasons, Venezuela should be added as a country designated for TPS as a way to help protect our brothers and sisters escaping Maduro’s terror."

More than 200,000 Venezuelans have settled in South Florida since 2014, according to estimates from a recent University of Miami study. The Orlando Sentinel reports at least 33,000 Venezuelans were living in Central Florida in 2016.

Díaz-Balart adds that Venezuelan people have suffered for years under the oppression of the Chavez-Maduro regime because of "hyperinflation, drastic shortages and egregious human rights abuses."

"The conditions in Venezuela remain too perilous for them to return," Díaz-Balart says. "Political opposition leaders are imprisoned, and some have died under mysterious circumstances. Meanwhile, Maduro’s thugs abduct, detain, and imprison protesters, while his state police and intelligence services use violence, intimidation, and arbitrary arrests to silence them. I am grateful to be able to provide a solution to so many who are escaping Maduro's totalitarian regime. … We must not force Venezuelans who have sought safety in the United States to return to such dangerous conditions.”