Venture-funded launch startup Relativity Space will set up shop on the Space Coast to launch its 3D-printed rockets by 2020. It's the first company from the market for small launch vehicles — a growing segment in the commercial space industry — to lock down such a deal in Cape Canaveral.

Los Angeles-based Relativity announced yesterday that it won a Statement of Capability from the Air Force, allowing the company to outfit Launch Complex 16 with facilities for payload processing and vehicle integration.

“Having the rare path toward an exclusive-use agreement at LC-16 ensures our satellite customers will have access to far more schedule certainty, and enables us to execute more frequent launches," Tim Ellis, cofounder and CEO of Relativity, said in a press release.

Once the site for the Air Force's Titan and Pershing ballistic missile programs, the roughly 20-acre launch pad will support Relativity's Terran 1 — a mid-sized, low-cost rocket made mostly from 3D-printed metallic alloys. 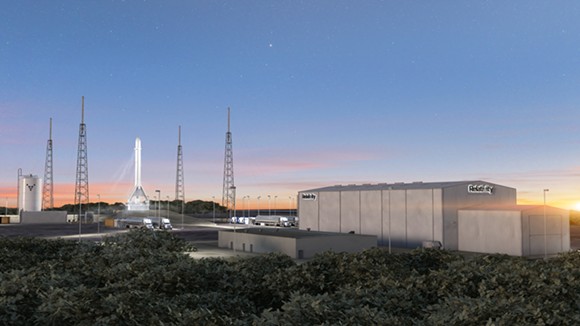 Terran 1, which is still in production, will be able to carry up to 2,755 pounds of small satellites 114 miles into orbit for around $10 million — a price tailored for the small satellite industry. To compare, SpaceX's Falcon 9 rocket ferries much larger payloads into deeper orbits for around $62 million.

"Complete printing of our rocket, Terran 1, reduces vehicle part count from nearly 100,000 to under 1,000 components – and is the first step toward an entirely autonomous factory," the company says on its website.

"We look forward to working with them as they continue the process to launch the Terran 1 vehicle from Cape Canaveral Air Force Station,” Thomas Eye, Director of Plans & Programs for the 45th Space Wing of the U.S. Air Force, said in the press release.

LC-16 was decommissioned in 1988 by the Nuclear Forces Treaty between President Ronald Reagan and the USSR — a landmark agreement in the Cold War detente that President Trump withdrew from in October. Its cadence of 141 launches will grow as Relativity aims for its "first full orbital launch by the end of 2020."

Relativity won't be the only space venture in the Cape capitalizing on 3D printing. Rocket Crafters, a freshman launch startup based in Titusville, is using DARPA research funds to 3D print tubes of hybrid rocket fuel for its concept rocket, Intrepid-1.