As Disney prepares to open two new Star Wars-themed lands this year, we are just now starting to learn details about what to expect in these billion-dollar areas.

Opening first in Disneyland this June, and then “late fall” at Disney’s Hollywood Studios, Star Wars: Galaxy’s Edge will be the largest, most detailed, and most expensive single themed lands Disney has ever built.

Disney has previously released details on the market-like shopping corridor where guests will be able to purchase a wide variety of exotic space-themed items. Similar to Universal’s Harry Potter themed lands, the merchandise within the area will not be clearly branded; most of the typical Star Wars toys and other merchandise will be at other gift shops around the park. Taking another cue from Universal, the new Star Wars land will also be filled with multiple unique drink and food items, including a non-dairy Blue Milk drink.

We also already know many details regarding the cantina, where RX-24, better known as Rex (the robot that was previously the pilot in Star Tours), will be a DJ. A second counter service restaurant will also be found within Galaxy’s Edge. 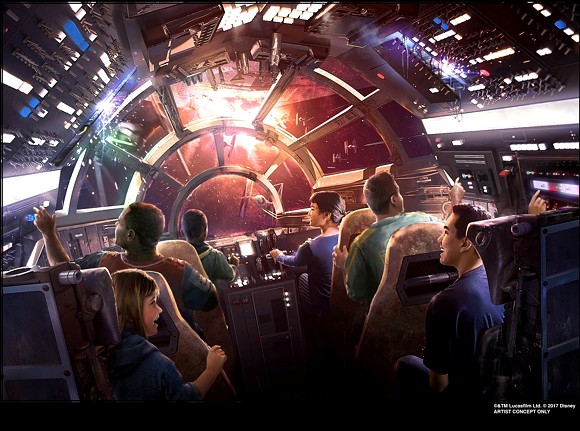 There has been plenty of hype regarding the Millennium Falcon: Smugglers Run ride. This screen-based simulator ride will see guests broken into groups of six, then together those six individuals will “pilot” the iconic spaceship via 200-plus buttons, all of which will do something. Some fans have already expressed concerns regarding how difficult this high-tech, simulator may be to navigate. With guests speaking different languages and seeking various levels of interactivity, relying upon one another to have an enjoyable ride experience might prove to be an issue for Disney. And that’s not even considering the ride performance record that guests can choose to have connected to their account, which would allow characters within the land to have a personalized interaction with the guest based on their performance on the ride.

Millennium Falcon: Smugglers Run will house some of the most powerful computers ever to be used in a tourist attraction, and it might be the most anticipated ride ever built, but just next door is another attraction that, according to new leaks, might be the sleeper hit of Star Wars: Galaxy’s Edge.

Star Wars: Rise of the Resistance is a family-friendly dark ride more typical of a traditional Disney ride. Disney has shared very little regarding this attraction, despite it being the largest indoor attraction the company has ever built, instead directing attention to the Millennium Falcon attraction.

Disney CEO Bob Iger has explained that Rise of the Resistance will be an "epic Star Wars adventure that puts you in the middle of a climactic battle between the First Order and the Resistance."

Multiple sources, including industry insider Alicia Stella of Orlando ParkStop and Attractions Magazine, have recently shared new details regarding the Rise of the Resistance ride. When including the themed queue areas that will be part of the larger storyline and the multiple pre-shows, the full attraction will be a nearly 30-minute-long experience, with most estimates placing the entire experience at roughly 28 minutes from start to finish.

Guests will enter into a Resistance camp where the main queue area will be located. A pre-show of some sort will take place in this area where guests will be broken into large groups. After this Resistance themed pre-show, the groups will then enter the blue and white Resistance shuttle transport spaceship to move into space. Similar to Epcot’s old hydrolators or Gringotts’s elevators, this spaceship won’t be much of a ride, though unlike either of the examples, here, in a move straight out of Willy Wonka, guests will enter and exit via the same door. The entire room sits upon a giant turntable that will slowly move to allow for this trick. This pre-show on a turntable is what led to some early rumors of guests disembarking from the ride during a portion of it. An early concept called for smaller, omnimover-style escape pods instead of the larger room but those plans seem to have since been updated.

When guests exit the shuttle transport ship they will be inside a First Order Star Destroyer. After passing through some impressive cargo bay rooms where life-sized TIE fighters will sit, guest will enter into the loading area. Here they will board eight-passenger, trackless ride vehicles similar to the ones used on SeaWorld’s Antarctica ride, though much more advanced. Cast Members assisting with the guest boarding will be dressed as part of the First Order and not in traditional ride operator outfits.

These First Order Fleet Transport ride vehicles will navigate the corridors of the Death Star, thanks to an R5 droid animatronic that will sit in the front of every ride vehicle. During the ride, it will pass by an estimated 300 animatronics and through some rooms with ceilings six stories tall. One scene alone in the attraction will have over twelve dozen storm trooper animatronics in it and massive jumbotron size screens simulating open bay doors looking into space. Another will house life-size AT-ATs towering overhead that will move their heads and fire at the ride vehicles. 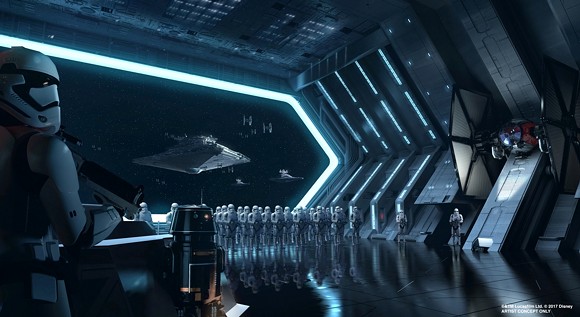 Scott Trowbridge, who is the lead Imagineer for the project, is drawing heavily from his former attractions, most notably The Amazing Adventures of Spider-Man at Islands of Adventure. But unlike Spider-Man, Rise of the Resistance won’t require 3D glasses. Disney is using a plethora of cutting-edge technologies, as witnessed in the seemingly never-ending stream of related patents. An updated Pepper’s Ghost effect will allow Disney to project three-dimensional scenes on , making fight scenes look even more realistic. A video for the new attraction also shows off a new laser effect that Disney has patented that makes only a section of the laser beam visible, better replicating the lasers from the movies. Throughout the ride, guests will come in contact multiple times with Kylo Ren, but it’s unclear where exactly in the Star Wars timeline the ride will take place.

Toward the end of the estimated eight-minute-long ride, the ride vehicles will move onto platforms similar to the ones used on Tower of Terror, that will allow for greater motion including a multi-story drop during an intense closing scene where the guests will be crashing back towards Batuu, the planet they just left. After the fierce battle filled finale, guest will exit the attraction past a broken, crashed ship before entering back to the land.

Screens will be used throughout the ride, but most of the focus will be more realistic effects that will happen all around the guests. With thousands of special effects, hundreds of animatronics, and show scenes larger than entire attractions there’s no doubt that this will be the most technologically advanced ride ever conceived. Despite all of this, it has an estimated throughput of roughly 1500-1900 guests per hour.

Some estimates call for 200,000 guests on opening day, so even with a massive throughput, the lines for the attractions will likely break all previous records, making that 30-minute-long experience all the more important.

The Disneyland version of Star Wars: Galaxy’s Edge should open within the next 4 to 6 months. Upcharge, after hours pre-opening previews are expected with some insiders speculating that the cost of tickets for these events costing well above $500 per person, with some, such as Touring Plans’ Len Testa, placing the likely ticket cost closer to the $1,000 per person range.

Disney has yet to confirm the storylines for the attractions, the opening dates for the new land, or any type of special preview events ahead of the opening but in Southern California, where the resort just saw a massive, jaw dropping price increase, they have begun marketing the new land ahead of this summer’s opening. A similar price increase is expected this fall’s opening at Hollywood Studios.