Florida has a serious problem with right-wing extremists 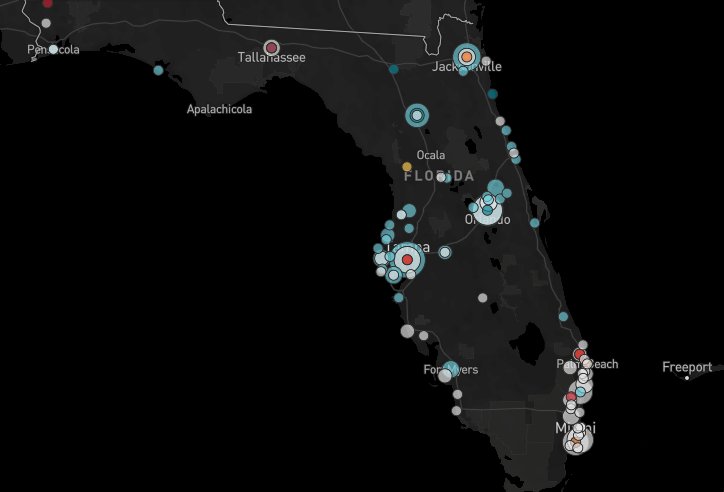 Over the last two years, incidents involving extremists groups have dramatically increased across the country, but this issue is particularly evident in Florida.

According to a study released today by the Anti-Defamation League's Center on Extremism, from 2017 to 2018, extremist groups in Florida have accounted for 197 incidents, including five murders/mass shootings, five terror plots and one police shootout, as well as seven rallies and 83 instances of propaganda distribution.

Most significantly, the report highlights Florida as home to three of the worst extremist-related murders from the last year: the Palm Beach Gardens killings, the school shooting that left 17 dead in Parkland, and the yoga studio shooting in Tallahassee. It also includes the attempted bombings by the Florida "MAGA Bomber."

The other 98 weren't attributed to any specific group, but were categorized as related to anti-Semitism.

Member of extremist group 'Proud Boys' considering a run for Orange County Republican Executive Committee
By Colin Wolf
Blogs
Data from the ADL shows that the bulk of these incidents were performed by white supremacist and alt-right groups like Identity Evropa, Loyal White Knights and Patriot Front.

In the Orlando area, 20 instances were reported between 2017 and 2018, with the majority involving Identity Evropa. For those of you unfamiliar with this group, the Southern Poverty Law Center describes them as a hate group bent on "preserving western culture." The group's founding leader, Nathan Damigo, was once quoted as saying "I think one of the major books that got me started was David Duke's My Awakening, and I think from there the rest was really history."

In Orlando's surrounding areas there were three instances reported in both Sanford and Maitland, and one each in Longwood, Oviedo and Ocoee.

Related Get to know your Orlando-area hate groups

Get to know your Orlando-area hate groups
By Colin Wolf
Blogs
Though the Sunshine State doesn't necessarily lead the country in these reports, Florida still ranks among the top. Statewide, Florida reported the fourth most incidents from extremist groups; only other heavily populated states like New York (472), California (470) and Texas (270) experienced more activity.

As a whole, 2018 was the fourth deadliest year for domestic extremism since 1970, with a total of 50 deaths, and right wing groups were associated with every single one.  "Every one of the 50 murders documented by the COE was committed by a person or persons with ties to right-wing extremism, although in one incident the perpetrator had switched from white supremacist to radical Islamist beliefs prior to committing the murder," says the report.

The entire sobering report, including the interactive map, can be viewed here.