The Tallahassee Democrat reports Florida Secretary of State Michael Ertel has resigned after photos surfaced of him dressed up as a Hurricane Katrina victim in blackface.

Ertel, who had been the Seminole County Supervisor of Elections since 2005, was appointed by Gov. Ron DeSantis to the cabinet position in December.

The Democrat reports the photos were taken at a private Halloween party about eight months after Ertel was appointed as the Seminole County elections chief and just weeks after Katrina killed hundreds in New Orleans. In the photos, Ertel is in blackface wearing red lipstick, earrings, a New Orleans Saints bandanna and a purple T-shirt with "Katrina Victim" written on it. Ertel, 49, confirmed to the Democrat that he is the person in the photograph.

"There's nothing I can say," Ertel told the Democrat when asked for a comment.

The Republican official resigned shortly after the Democrat presented the photos to DeSantis' office Thursday morning. He'd been in office a little more than two weeks.

"I am submitting my resignation as Florida Secretary of State effective immediately," Ertel wrote in an email to the DeSantis administration Thursday afternoon. "It has been an honor to serve you and the voters of Florida." 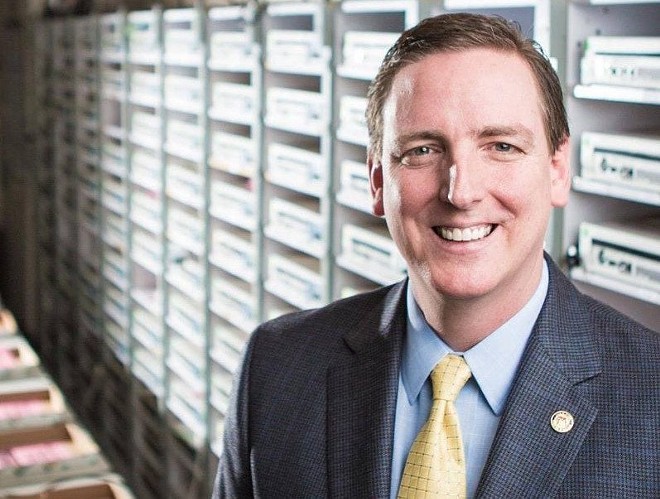 At a press conference in Marianna on Thursday, DeSantis called Ertel's resignation "unfortunate."

DeSantis faced accusations of racism during the 2018 Florida governor's race. The then-nominee told Florida voters not to "monkey this up" by electing Democratic candidate Andrew Gillum, the state's first African American gubernatorial nominee; refused to return $20,000 from a Republican donor who tweeted derogatory slurs at President Obama; and he kept company with the likes of David Horowitz, a conservative activist who once said that African Americans should be more grateful to white people for their freedom.

Ertel was brought on to the DeSantis administration because of his election expertise. He was first appointed as Seminole County Supervisor of Elections by former Gov. Jeb Bush and was re-elected four times.

In 2012, he testified before a U.S. Senate subcommittee about Florida’s elections laws and has testified before Texas lawmakers on voter identification laws. Ertel also won recognition from the International Electoral Awards for "building voter trust," according to his official biography.

Prior to that, he spent eight years in the U.S. Army and was a public affairs representative for the department during the Los Angeles riots, Macedonian and Bosnian operations. Ertel was also a spokesperson for Seminole County government and conducted post-disaster public relations for the state tourism agency Visit Florida.