Once again, Orlando ranks as the country's deadliest city for pedestrians

Orlando is a car city. We have no reliable and affordable mode of mass public transportation, and our streets were never designed for anything other than traveling at ludicrous speeds in a steel cage, surrounded by airbags and restraints.

We've known for sometime that it's incredibly unsafe to use our legs in this tremendously unwalkable city, but now there's even more concrete numbers to reinforce this notion.

A new study released Wednesday from Smart Growth America, points out that the Orlando area (which includes Orlando, Kissimmee and Sanford) is the deadliest metro area in the country for pedestrians.

According to the "Dangerous by Design" study, the Orlando area registered 656 pedestrian deaths between 2008 and 2017, which is the sixth most per capita for a city over 100,000 people.

Unsurprisingly, seven out of the top 10 worst cities for pedestrians were other cities in Florida, including Daytona (2), Lakeland (5), and Tampa (9). So it shouldn't be much of a surprise that Florida as a whole also ranked as the worst state for pedestrian deaths, registering 5,433 deaths since 2008.

The new report also includes a very grim interactive map showing every pedestrian death in the Orlando area over the last decade. A few areas worth mentioning include Orlando's tourist district, the Mills 50 intersection at Colonial, and downtown, which had three deaths involving senior citizens. 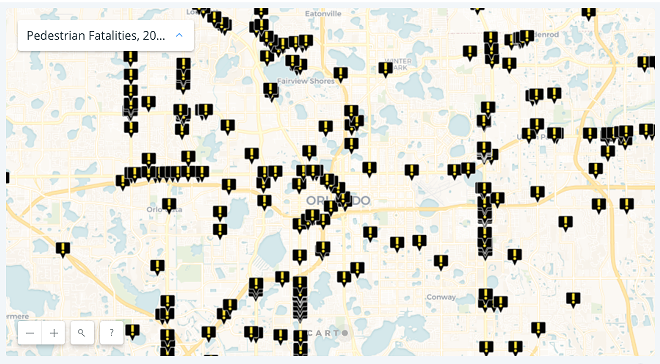 One thing to note is that Orlando has had a long troubling history with pedestrian deaths. In fact, last year we claimed the third spot in this exact same study. But the City of Orlando has a few significant moves in attempting to improve this issue. Last August, the city approved $55,000 in funds from the University of North Florida aimed at improving pedestrian safety, and new bike paths are in the works for areas like Robinson near Lake Eola, and, of course, there's the new pedestrian bridge going up over Colonial Drive.

"It is critically important we reverse this trend. The only acceptable number of pedestrian deaths is zero and the City is doing everything in its power to achieve this goal," said Billy Hattaway, the Director of Transportation, City of Orlando in a statement.

While there's no one particular reason for this, it doesn't help that Orlando has a severe lack of reliable and affordable mass transportation options, a very apparent shortage of protected/dedicated bike lanes, as well an insufficient amount of crosswalks, particularly in areas with heavy minority populations.

This is unfortunate, because according to the same 2019 study, the groups that suffer the highest fatality rates are people of color, older adults, and low-income neighborhoods, and if you click no the map above, this is evident. "From 2008-2017, black people were 72 percent more likely to have been hit and killed by a driver than people of other races. American Indians were three times as likely to be killed. Lower income neighborhoods saw a higher share of pedestrian deaths," reads the report.

But besides eminent death, a lack of pedestrian-friendly infrastructure can dramatically impact neighborhoods. According to a 2017 joint report from ProPublica and the Florida Times-Union, 56 percent of all jaywalking tickets given in Orange County over a five year period were flawed, and the majority of those tickets were issued to African-Americans.

The report found that 65o tickets were given from 2012 to 2017 in Orange County, and 40 percent of those were given to black residents, who make up 23 percent of the county's population and live in areas that weren't in between intersections with traffic lights, or that provide proper places to cross.

But this isn't really a unique Orlando or even Florida problem. From 2008 to 2017, drivers killed nearly 50,000 pedestrians, which represents a 35 percent increase nationwide over the last decade. The last two years have actually been the worst, with 2016 and 2017 logging the most pedestrian deaths since 1990.

So, for now, if you don't have a car in Orlando you're very screwed. Then again, last year a report ranked Orlando as one of the top metros for traffic, and another from the the National Highway Traffic Safety Administration placed I-4 as the deadliest highway in the country.