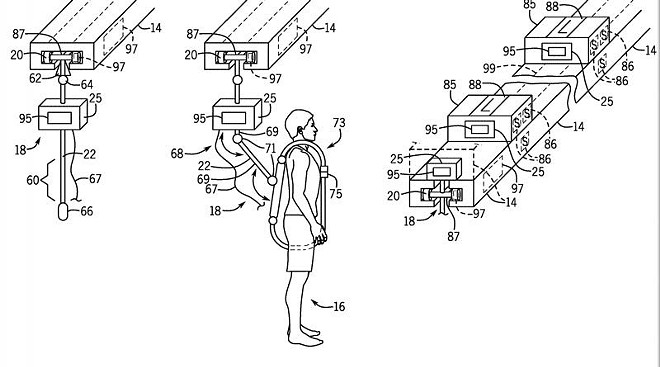 Virtual reality has taken the location-based gaming industry by storm in recent years, with stand-alone VR attractions popping up all over Orlando. But one fundamental problem has kept the technology out of the big theme parks, or at least restricted it to roller coasters: How do you keep large numbers of helmet-wearing guests from bumping into each other?

Universal may have struck upon a solution in their new patent application for "Systems and Methods for Virtual Reality and Augmented Reality Path Management," which basically boils down to harnessing guests like hyperactive toddlers on a leash and tethering them to an overhead track, allowing them to walk forward without straying across their neighbors' path.

We've seen virtual reality systems at IAAPA with headsets that were attached to an overhead boom, but those were used by a single player within a limited area. Universal's idea appears to enable multiple guests to use the attraction simultaneously using a "block zone" method "to ensure that users do not interfere with other users' experiences."

Similar to systems that allow multiple roller coaster trains to be on the same track without crashing into each other, the tether would restrain guests from getting too close to a slower player ahead of them while displaying "VR images of a locked gate, a dense fog, dense foliage, a wall, etc." The tracks could even have multiple branching paths, giving users the illusion of free roaming without fear of flailing into fellow players.

The tether could also function as a "shock absorber [which] may absorb at least some force of the user if the user loses balance," potentially permitting users to climb through vertical environments similar to an adventure ropes course. Or it could be a rigid arm capable of lifting the guest off the ground "which may induce a feeling of weightlessness in the user in a falling or space-themed VR scenario." 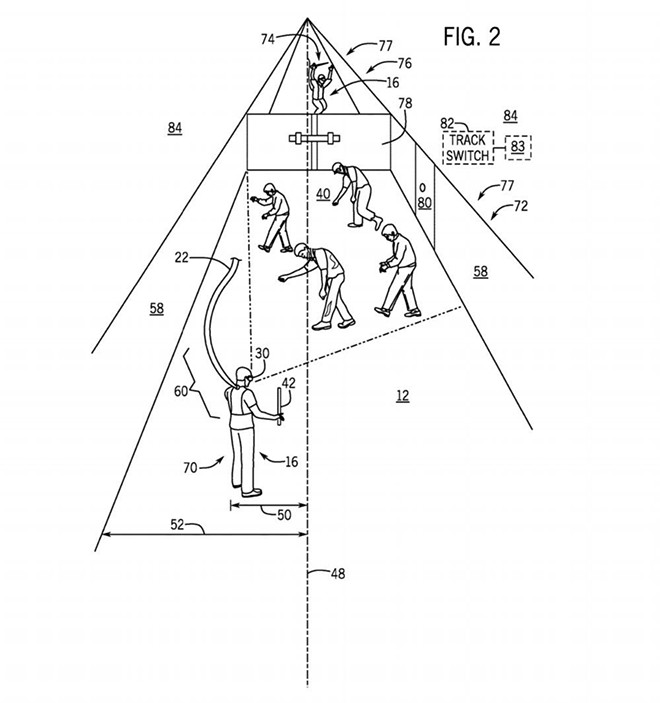 Like most theme park patent applications, there's no telling if or when this technology will ever show up in the parks.