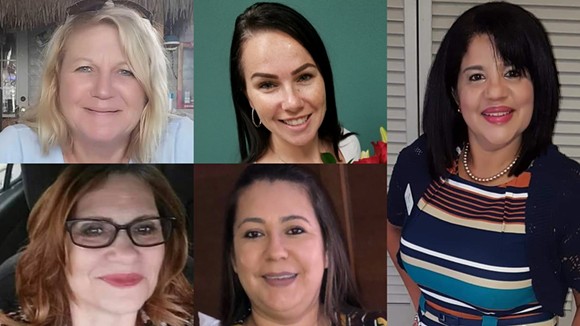 The five women killed by a gunman at a Sebring bank last week in Florida's latest mass shooting have been identified.

Sebring Police allege the gunman, 21-year-old Zephen Xaver, shot up the bank in an apparent act of senseless violence.

The youngest victim of the mass shooting was Jessica Montague, 31, a married mother of three who was a teller at the bank. On Facebook, a SunTrust co-worker named Sharon Thompson Middleton said Montague was "a young mom making a future for her children they could be proud of. She was a small person with a huge personality. … Her own three babies and her big extended family with her husband meant everything to her."

Marisol López, 55, was a mother of two who reportedly loved to travel with her husband and family. She was remembered by Thompson Middleton as a longtime SunTrust employee who "was my right arm, my greatest resource and another sister to me."

"What always stood out about Marisol was her kindness, her giving heart, her sweet spirit, and her willingness to help everyone," a former co-worker, Shelley Speight López, posted on Facebook. "She never complained, never lost her temper, and had a work ethic second to none!"

Ana Piñon-Williams, 38, was a new employee at SunTrust, according to her brother-in-law Tim Williams. She leaves behind her husband, Chad Williams, three children and four stepchildren.

"Ana found her life when she surrendered it to Jesus Christ," Williams said in a statement. "We are determined to let Ana’s memory be marked by the life she lived, the people she loved, and the difference she made. She accepted others where they were in life; loving came easy for her. Loving her was easy; living without her will be hard. Our family will not only survive, but we will thrive as a living testament to the power of prayer and faith! We will never forget Ana, she will forever live on in our hearts and minds."

Debra Cook, 54, was a mother and grandmother originally from Twentynine Palms, California. She also worked at the SunTrust bank.

"So proud of Debra and all she accomplished," Thompson Middleton wrote on Facebook after her co-worker's death. "We watched her disappear before our eyes. She was such an inspiration!"

The last victim of the mass shooting was Cynthia "Cindy" Watson, 65, who was a customer at the bank that day. The Highland News-Sun reports Watson had gotten married earlier this month to her five-year partner, Tony Watson. She lived with her husband, two dogs, chickens and goats.

"She’s the first real true friend I ever had," her best friend Marilyn Martin told the News-Sun. "She was one of those people who would do anything for anybody."

SunTrust has set up the "Sebring Strong Survivors Fund" on GoFundMe to raise financial support for the victims' families.

On Jan. 23 around 12:30 p.m., an armed Xaver entered and overtook the bank by force. Authorities say Xaver executed the five women with shots to the back of the head and upper torso, according to an arrest affidavit. The victims were found lying face down in the bank's main lobby and surrounded by shell casings. A sixth employee who was in the bank managed to escape during the shooting and call police. Investigators are still trying to determine whether a 9mm handgun and ammunition purchased by Xaver just days before shooting is the same weapon used in the attack.

The suspect later called 911 and told emergency dispatchers that he had shot up the bank and was armed with a handgun and bulletproof vest. After finding the bank's doors locked, Sebring Police attempted to negotiate with the suspect, but after about an hour, a SWAT team used an armored vehicle to breach the entrance and arrest Xaver, according to the arrest report.

Xaver has since been charged with five counts of first-degree murder and is currently being held at the Highlands County jail on no bond.

"Our community suffered a tremendous loss at the hands of a heinous criminal," Sebring Police Chief Karl Hoglund said. "Zephen Allen Xaver knowingly and intentionally took the lives of five of our fellow community members; our sisters, our mothers, our daughters, our co-workers. Perhaps the most unfortunate thing is they are at this point, victims of a senseless crime."

The Associated Press reports Xaver, who is from Indiana, was sent to a behavioral health center as a high-school student after telling a counselor he had a dream of killing students in a classroom. A former girlfriend told
WSBT 22 that Xaver was fascinated by guns and "always hated people and wanted everybody to die." In 2017, police contacted Xaver's mother after he told a female student he was "possibly thinking of suicide by cop" and "taking hostages," according to CNN.

Xaver and his mother moved to Sebring several months ago, and the 21-year-old had recently quit his new job as a correctional officer trainee at Avon Park Correctional Institution on Jan. 9 without explanation, Florida Today reports.