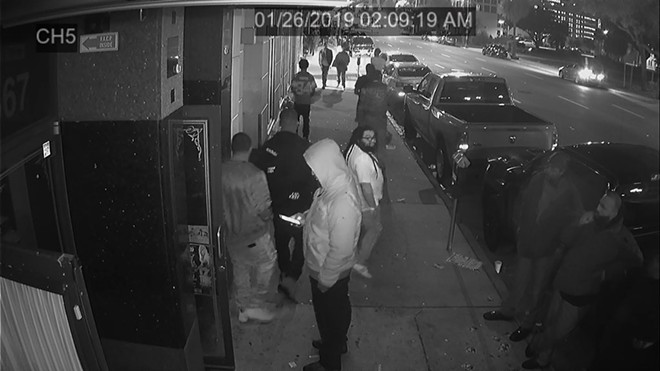 Orlando Police have released surveillance video and an image of three suspected gunmen involved in a weekend downtown Orlando shooting that left one victim dead and injured two others.

The video shows Keveon D. Smith, 22, talking with two other people in the parking lot of 320 N. Magnolia Ave. around 2:13 a.m. on Saturday, Jan. 26. A man in a black jacket comes from behind Smith and punches him in the head.

As Smith runs away, the man in the black jacket fires at him with a gun. A second man in a light-colored jacket and a third man with long dreadlocks also shot at Smith.

Smith was found with life-threatening injuries in the parking lot of the Bank of America on Orange Avenue. He was pronounced dead after being taken to a local hospital. At Club Lit, police found two additional victims who had been shot, though their wounds were not life-threatening.

Can you ID? The 3 individuals in this video are responsible for the murder of Keveon Smith on 1/26/19. If you have any information regarding this homicide investigation, please call 407-246-2900. pic.twitter.com/1jQ41CrICG


Police are also looking for a black Volkswagen Passat that the suspects appear to have used to flee. People with information on the homicide can call 407-246-2900.