A few weeks ago, documents began leaking out from a Comcast meeting where Universal’s new Orlando theme park was discussed. The blurry photos showed the Fantastic Worlds name with the Super Mario World concept art behind it.

Since that initial leak, other details from the town hall meeting have begun to surface, giving us brand-new intel on the still-unannounced theme park that will be built along Kirkman and Universal Boulevard, just south and east of Lockheed Martin.

Alicia Stella of Orlando Park Stop stitched together the multiple leaked images along with ones that were shared exclusively with her to create a best guess at what the new theme park looked like. Comcast has yet to verify that the photos are in fact from an official meeting, but multiple insiders have independently confirmed the legitimacy of the documents.

According to the documents, the new park will be one of the largest theme parks Universal has ever built. A hub-and-spoke design, similar to the Magic Kingdom or Kingdom, will be used. This is a departure from other Universal parks that have used the "race track" circular model, as seen at Islands of Adventure. Both Universal Studios Singapore, the most recent Universal park to open, and the upcoming Beijing park use the "race track" model. The proposed South Korea, Dubai and indoor Moscow parks all used this layout as well.

Like most hub-and-spoke designs, the new Universal park will have a central icon in the hub, but it is still unclear what this icon will be.

Theming will be front and center in the new park; the days of bland warehouses and carnival rides shoehorned into a theme are long gone. Everything in the park will be “fully immersive,” from the attractions to the restaurants to even the restrooms.

Previous rumors pointed to a few intellectual properties that may be used in the new park. The documents didn’t confirm many, but they do focus heavily on the Super Mario World, which was previously announced for Orlando. That "world" looks to have its green pipe entrance still. Other "worlds" in the new park will have similar entrances that block views into them from the hub area, like that of Diagon Alley.

At the bottom of the leaked page are a number of trademarks, including Harry Potter and Jurassic Park-related ones, but the one that stuck out the most are the mentions of Universal’s classic monsters. Both the Potter and Jurassic Park trademarks might be listed due to other additions not related to the new park (i.e. the new Potter coaster currently under construction at Islands of Adventure and the Jurassic World ride being developed at Universal Studios Hollywood), but the classic monsters have been a long-running rumor for the new park. Recent attempts to revive the monsters brand have been met with box office failures, but with a new movie deal in the works and with new merchandise recently appearing at the Universal theme parks, it looks like this old-school brand might have new life.

It’s thought that the Classic Monsters would be one of the more budget-friendly lands in the new park with more focus being on the other “worlds,” including a New Fantasyland style DreamWorks area that is rumored to be named DreamWorlds, a possible Fantastic Beasts area, and the aforementioned Super Nintendo World. The Fantastic Beasts area is also now in question thanks to the movies underperforming at the box office and Warner Brothers delaying the Fantastic Worlds trademark.

Related It really looks like Warner Bros. wants a fight with Universal over their new theme park name

It really looks like Warner Bros. wants a fight with Universal over their new theme park name
By Ken Storey
Blogs 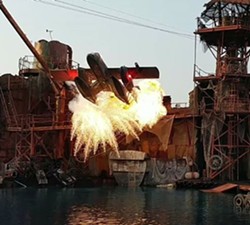 A Waterworld-themed stunt show is highly rumored for the new park though it is unclear if this would be in its own mini-land or part of a larger land within the park.

The budget for the new park hasn’t been revealed, but Universal Studios Beijing is costing an estimated $6.5 billion, and at the town hall meeting Comcast VP and NBCUniversal CEO Steve Burke are reported to have said that between the last eight year and the next five years Universal will spend more on its theme park division than it cost to acquire it.

As Robert Niles pointed out on Theme Park Insider, that figure still doesn’t give us a complete picture of how much the company plans to spend, but it will be somewhere between $16.7 billion and $23.4 billion. With most of the major projects over the next five years already announced or strongly rumored, that budget would give the new Orlando park a final price tag similar to that of the Beijing park.

For comparison, Islands of Adventure cost an estimated $1 billion to construct in the late 1990s, adjusted for inflation that would be just under $1.6 billion today, or roughly a fourth of the cost of the new Beijing park. Diagon Alley cost an estimated $400 million to construct while the upcoming Star Wars land at Hollywood Studios and Disneyland in Anaheim costing a reported $1 billion each to develop.

Despite the mind-boggling price tag for the new park, Universal is planning ahead with entire sections of the park being left for future expansions that will allow for entirely new lands, a distinct shift from earlier parks where they had only attraction size plots within opening day lands for future growth. That design has proven difficult as the parks add Potter, Super Nintendo, and other new franchises to the parks.

During the town hall, Burke also reportedly said that in the past Disney has gotten “a free ride” and Universal was stepping up to end that. The leaked documents mention Universal is hoping that the new park will expand a Universal Orlando vacation from a two or three-day travel destination into a full week-long option.

The new park is expected to open in the early 2020s, likely just after Walt Disney World’s 50th Anniversary celebration in 2021-2022.