Neko Case is one of the few artists who can be called “one and only” without hyperbole or debate. She’s exceptional in her writing and songs. But most of all, it’s that voice.

In tone and movement, it’s a thing of singular craft and immaculacy. All resonance without a hint of earthly exertion, her pure, tasteful singing is endless in finish without any overreach or histrionics. It’s a phenomenon whose virtues could warrant an entire essay of their own.

But just as noteworthy is how truly 24K Case’s golden voice is in natural acoustic quality and genius, something her live performance certifies with rare brilliance. It’s a vocal presence so occupying that she can own every cubic inch of a room up to the rafters with just an exhale.

Even though she could’ve filled the volume of the music hall with only a mic and a ukulele, Neko Case came grand as a seven-player ensemble of impressive scope and wingspan. With a set that centered heavily on her latest album (Hell-On), she and her band rendered the songs live with a degree of fidelity and vividness that’s virtual perfection. It was fitting accompaniment for one of this generation’s most enveloping and inhabiting voices.

Opening Nashville country neoclassicist Nikki Lane has been roaming the Sunshine State the last couple weeks picking up some high-profile dates like with Reckless Kelly, at the Outlaw Country Cruise out of Tampa and, thankfully, this last one, perhaps her most appropriate pairing of all. 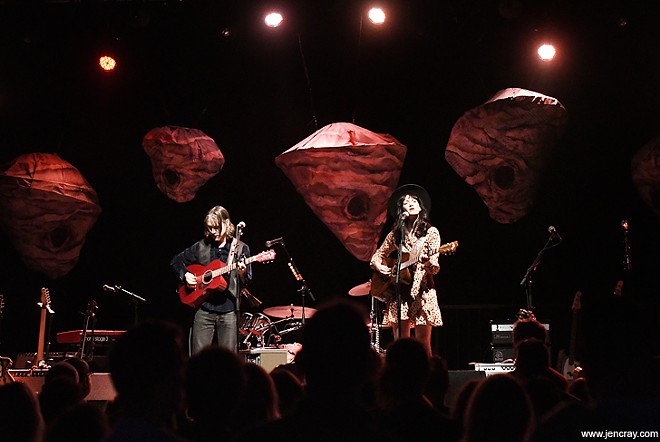 While Neko Case is by now in full reign as an indie Americana queen, Lane has in recent years been proving herself among the rising cream of her class (her sophomore album All or Nothin’ on New West Records landed on my personal top albums list of 2014).

This performance, Lane played accompanied only by guitarist Jonathan Tyler. More than just the unusually simple arrangement, this was a more sedate set than she gave here back in 2014.

But like a Wanda Jackson for the modern indie set, she’s still a pistol. Even with the added seasoning and measure that these few years have given her, the power still beats raw and wild in her voice. For whatever paths she travels in her crackling roots revivalism, may that nerve never be tamed.