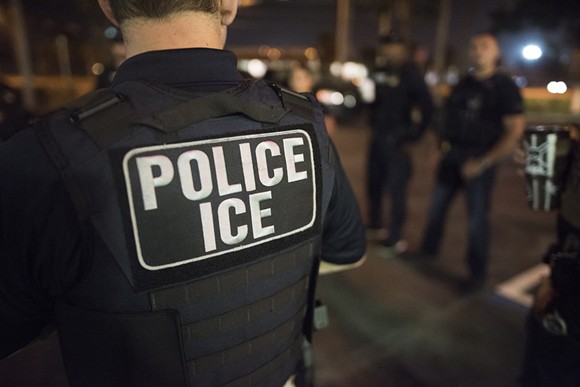 SB 168, filed by state Sen. Joe Gruters, R-Sarasota, demands that all state agencies, municipal governments and police departments not only comply with federal immigration law but also work with agencies like U.S. Immigration and Customs Enforcement to impose it. The Republican-dominated Florida House voted to pass a similar crackdown last year, but it failed in the Senate.

The bill prohibits local elected officials from passing "sanctuary policies" that stop law enforcement agencies from communicating or cooperating with immigration authorities, specifically around ICE detainer requests. When an undocumented person is arrested, ICE will ask a local jail to detain that inmate for another 48 hours after being ordered released to give ICE agents enough time to pick up the inmate.

This happens regardless of what type of alleged crime happened – it can be something as serious as a felony first-degree murder to a misdemeanor for driving without a license (undocumented immigrants aren't allowed to get licenses in Florida). So-called "sanctuary cities" are municipal governments that won't hold undocumented inmates for immigration officials because it's unconstitutional to detain people for deportation proceedings without a warrant.

At least 28 counties in Florida have agreed to what they believe is a constitutional workaround with ICE called "Basic Ordering Agreements." Instead of detainer requests, ICE pays local sheriffs $50 for each undocumented inmate they hold for up to 48 hours and release to ICE. Neither Orange County nor Osceola County has agreed to a BOA with ICE, though Seminole County has signed this agreement. The ACLU of Florida is currently suing Monroe County for unlawfully detaining a U.S. citizen under this agreement with ICE.

Under SB 168, local law enforcement would be required to not only comply with ICE detainers but also notify immigration authorities before the release of an inmate, provide them with access to inmates for interviews, and give them an inmate's incarceration status or release date.

Local police and sheriff departments could also initiate "immigration status investigation(s)," which could not be prevented by municipal governments, according to the bill.

SB 168 allows law enforcement agencies to withhold the immigration status of crime victims or witnesses from federal officials. But that only applies to victims and witnesses who cooperate with cops in a "timely and good faith" manner during the investigation and prosecution of a crime.

Immigration advocates across Florida say SB 168 is a harmful policy that would break the trust between undocumented communities and local governments.

"There's already a lot of fear," says Yesica Ramirez, an organizer with the Apopka-based Farmworker Association of Florida, in Spanish. "Our people are only here to work. We do the most difficult, dangerous, badly paid jobs. At times, we tolerate physical and verbal abuse. This makes us feel persecuted and obviously discriminated against. It's not fair – we are only here to work to give a better future for our children and families."

Orlando Weekly reached out to Sen. Gruters for comment, but he did not immediately respond.

Chris Cuevas, executive director of QLatinx, says the legislation would subject vulnerable communities, like undocumented LGBTQ people and women, to further violence. Cuevas points to the death of Roxsana Rodriguez, a transgender woman who was physically abused while in the custody of ICE and ultimately died of severe, untreated dehydration.

"This violates the rights of local cities and counties to protect the civil rights of their residents," Cuevas says. "It's basically forcing local law enforcement to do the work of federal immigration authorities and taking away from their responsibility to protect the community."

The Farmworker Association of Florida, QLatinx, the Florida Immigrant Coalition and other groups in the TRUST Orlando Coalition successfully convinced the Orlando City Council to pass a resolution stopping police from asking "law-abiding" people about their immigration status.

"SB 168 would require Orlando and other municipalities to report many of it's residents, students, and mothers to ICE for deportation," she says in a statement. "It what we stand for or believe in in this community and it hurts the work of the Orlando Police Department by proposing a state law that would discourage victims and witnesses of crimes in Orlando from contacting the police for support. It would create insecurity and divert limited resources of our officials towards the hateful mission of separating families."

Though city spokesperson Karyn Barber says Orlando's "fair treatment for all policy" passes muster under SB 168 because it does not prohibit city employees from cooperating with federal immigration authorities as required by state or federal law.

"The City of Orlando has a long history of advancing policies that ensure inclusiveness and embrace diversity," Barber says. "We are proud of the Fair Treatment of All Policy and Resolution we worked together with the community to develop and adopted last year. Orlando will continue to stand behind these policies and continue working together to overcome hate, intolerance and injustice and embrace diversity, equality and fairness here and throughout the nation."

Immigration advocates plan to mobilize in Tallahassee against SB 168 on Monday, Feb. 11 when the bill is scheduled to be heard by the state Senate’s Judiciary Committee. People who would like go with "We Are Florida" campaign can sign up bit.ly/2019tally.