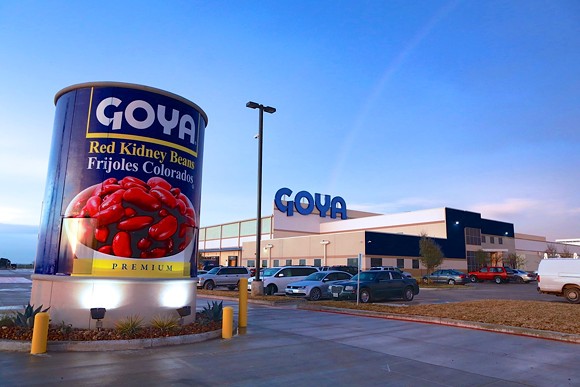 Goya Foods is planning to build a 330,000-square-foot distribution warehouse in Apopka that could open by 2020.

The Orlando Business Journal is the first to confirm the massive center will be located on 20 acres at the Mid-Florida Logistics Park. The company, which has seen huge sales growth in the past 10 years, purchased 40 acres in total at the site and is poised to start construction by April or May, according to OBJ.

Goya, the largest Hispanic-owned food company in the U.S., was started in 1936 by Don Prudencio Unanue and his wife Carolina, two Spanish immigrants who met in Puerto Rico and later started their business in New York City. The New Jersey-based Goya now provides over 2,500 food products from Spain, the Caribbean, Mexico, Central and South America, and is also responsible for some pretty catchy commercials.

Goya already owns one 135,000-square-foot distribution center in Central Florida near the Orlando International Airport, but that warehouse has been "maxed out," Goya spokesperson Anna del Rio Chong told OBJ.

"We are building a rail side distribution center to try to mitigate the ever-increasing costs of freight by expanding the movement of more cargo via rail," del Rio Chong said.

OBJ estimates the distribution warehouse could cost $42.9 million to build.