I can’t speak for all you vampires out there, but I wasn’t completely crushed about the Peter Murphy Bauhaus anniversary show getting unceremoniously canceled. It just removed the dilemma of missing yet another edition of Terribly Wrong, the audiovisual series helmed by veteran Orlando DJ Nigel John that rights the universe a bit by bringing edge and IQ back to electronic and dance music. So while in the thick of the mass gothic dismay inside the Plaza Live once the 12th-hour cancellation announcement came down, photographer Jen Cray and I looked at each other with a WTF shrug and bounced over to Will’s Pub with breeze for the clutch play.

The names bookending Terribly Wrong both happen to be alter egos of two very distinguished Orlando DJs. The cornerstone figure is Kurt Rambus, the dark, industrial-edged face of Nigel John. Although he’s already one of the city’s more progressive and literate DJs, his Rambus guise is a deep conceptual dive that further roots him in the Orlando beat vanguard.

His headlining set was a torrent of hardcore breakbeat. Pounding with density, torque and complexity, his sounds forged a bridge between mechanical and funky. It was a vision that pointed drum and bass forward, beyond the box of old jungle orthodoxy. Add in the presentation savvy of video projections shot through multiple layers of screens and you’ve got something far more absorbing than the basic DJ night.

The other alternate persona was Old.God, who’s a different look for the smart, left-leaning DJ Cub. His set was threaded with vivid tribal futurism. Intelligent but not strictly cerebral, the pulse was rich in polyrhythmic intellect but still propelled with primal jump and pump. 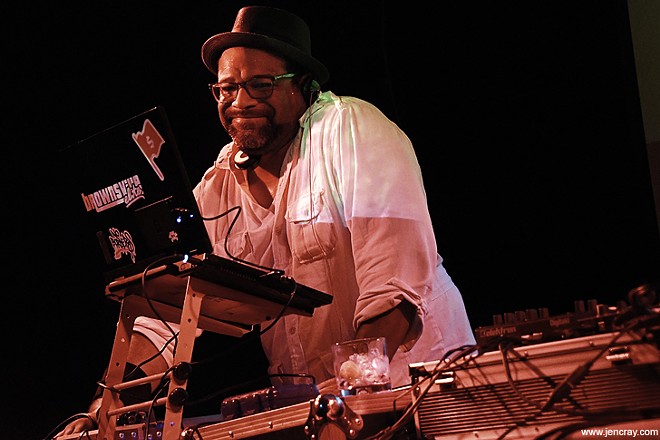 Together, this second volume establishes Terribly Wrong as a frontier event showcasing dance and electronic sounds on the threshold of now and next.