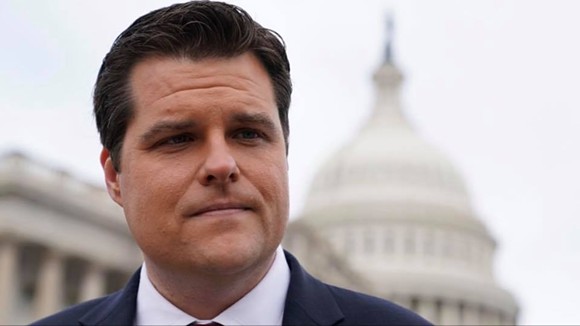 There are plenty of reasons to dislike Florida Rep. Matt Gaetz – like the time he brought a Holocaust denier to the State of the Union, or the time he tweeted an anti-Semitic conspiracy theory about George Soros bankrolling the migrant caravan days before the Pittsburgh synagogue shooting, or the time he said that the NRA takes 100 percent of the blame for the conduct of zero percent of its members, two weeks after the Parkland shooting.

Without a doubt, 2018 was Gaetz's most idiotic and most despicable year yet. However, Gaetz's latest act of buffoonery is a clear sign that Gaetz plans on topping his bullshit in 2019.

Last week during a gun control hearing, the NRA-backed congressman got into a shouting match with two fathers whose kids were among the 17 victims killed at Marjory Stoneman Douglas High School on Feb.14, 2018.

During the public hearing, Gaetz was rightfully jeered by the crowd after suggesting that a southern border wall will somehow protect us from school shootings, to which he was called out by Parkland parents Manuel Oliver and Fred Guttenberg.

The video of the altercation, which has since gone viral, shows Gaetz trying to bully the parents and eject Oliver from the public hearing.

Here is the video of @RepMattGaetz trying to get the father of a student killed in Parkland, FL (@manueloliver00) THROWN OUT of a @HouseJudiciary hearing on reducing gun violence.

This is beyond despicable. pic.twitter.com/YZF8EGW3hP


Now, a new campaign from Oliver is aiming to raise money for Gaetz's 2020 political opponent.

"It’s time for us to kick this NRA stooge out of Congress," says the campaign. "That’s why we’re raising $50,000 for his Democratic opponent in 2020 — over 50,000 people are killed and harmed by gun incidents in America each year. We don’t yet know who’ll run against Gaetz, but we want to make sure they have the funding they need to beat him."

Related Florida Rep. Matt Gaetz was literally the only person to vote against an anti-human trafficking bill

Florida Rep. Matt Gaetz was literally the only person to vote against an anti-human trafficking bill
By Xander Peters
Blogs

The campaign has already passed its original goal, but Gaetz, who represents Florida's 1st Congressional District, doesn't seem to be too worried.

"Elected & re-elected w 2/3 of the vote the last 3x I’ve been on the ballot," Gaetz tweeted Monday. "Won every county in my district the last 4x. This is what makes our republic great – the will of the people. See you on the field."

Elected & re-elected w 2/3 of the vote the last 3x I’ve been on the ballot. Won every county in my district the last 4x. This is what makes our republic great - the will of the people. See you on the field. #OpenGaetz https://t.co/JIqOG27A4T

2018 was Florida Rep. Matt Gaetz's dumbest year yet
By Colin Wolf
Blogs
Stay on top of Orlando news and views. Sign up for our weekly Headlines newsletter.