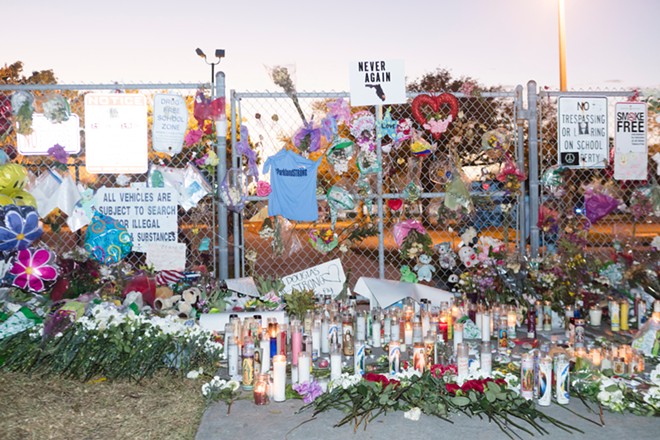 Outside the Florida Capitol, a bell tolled 17 times Thursday morning in somber recognition of the one-year anniversary of the state's deadliest school shooting.

Gov. Ron DeSantis and his wife, Casey, led a moment of silence for the victims of last year's massacre at Marjory Stoneman Douglas High School before traveling to the Parkland school to commemorate what the governor called "one of the worst days that we've had in the history of Florida."

Later in the day, DeSantis attended a wreath-laying ceremony at the Broward County high school and an evening prayer vigil in Parkland, one of numerous vigils being held throughout the state.

“On this solemn day, our state mourns the lives of the 17 souls lost at Marjory Stoneman Douglas High School one year ago. Since that tragic day, the Parkland community has demonstrated tremendous courage and resiliency, reminding us just how strong and united Floridians can be in the face of such devastating loss,” DeSantis said in a statement. “We will never forget the heroes who risked and sacrificed their lives to protect others, nor the actions taken that day by first responders. Casey and I continue to keep the families and loved ones of the innocents who were lost in our prayers as we honor their memory today in a moment of silence.”

Andrew Pollack, whose daughter, Meadow, was among the 14 students who were slain, joined DeSantis at the Capitol bell-ringing ceremony. Also killed were three faculty members.

For the grieving father, Thursday wasn’t different from any other day since the unthinkable happened.

“This is everyday life, for every parent who loses a kid like I did. We live it every single day. For today to be any different, it’s not. Every day is the same pain, from when you wake up until when you go to sleep,” Pollack told reporters.

Pollack, a close political ally of DeSantis, has been a fierce critic of suspended Broward County Sheriff Scott Israel and Broward County school officials, including Superintendent Robert Runcie, over their handling of the shooting incident and school safety.

“I fight for most Americans, who just want their kids safe in school. I am going to keep fighting until we get it,” he said.

Throughout the day, Florida political leaders and elected officials issued statements of condolence or memorial in recognition of the Parkland victims.

Introducing a resolution to honor their memory, U.S. Sen. Rick Scott, who was Florida’s governor at the time of the shooting, began his remarks by reading aloud the names of the 17 people who were killed.

“One year ago today, these 17 souls were taken from us in a brutal act of violence. They were sons and daughters, brothers and sisters. They were students and athletes and musicians and teachers. Not a day goes by that I don’t think about that day and the amazing people that were snuffed out by the deranged actions of a mad man. Over the course of the last year, I’ve spent countless hours with the families of the victims. Unfortunately, I wish we never had to meet like this,” Scott said.

The mass shooting sparked a national movement, led by students at the high school who quickly become international celebrities with appearances at the White House and state capitals and on television newscasts. The student-organized “March for Our Lives” movement drew thousands of supporters as the teens channeled their anger, fear and frustration into voter-registration drives and demands for stricter gun laws.

The attack on the school in an affluent Broward County suburb also angered parents, after investigations revealed failures by local, state and federal officials to intervene with confessed killer Nikolas Cruz before he opened fire on his former school. Cruz had a long and troubled history of interactions with educators, law enforcement and social services.

In response to the shooting, the Republican-controlled Legislature hurriedly passed a sweeping law addressing mental health, gun sales and school-safety measures. A statewide commission, created in the law, recently released a 458-page report detailing the events surrounding the attack and recommended a series of enhancements to the law and other changes aimed at making schools safer.

Since taking office last month, DeSantis has responded with a series of high-profile actions, including suspending Israel, accusing the sheriff of “incompetence” and “neglect of duty.” Israel is appealing the suspension.

On the eve of the one-year anniversary, the governor requested a statewide grand jury to probe whether school districts are complying with mandated safety measures. He also ordered the Department of Education to conduct an audit of school districts’ alternative discipline programs. And DeSantis gave sheriffs more time to request money for the school “guardian” program, which allows certain school personnel to be armed.