'Aladdin,' 'Mean Girls' and 'Miss Saigon' will anchor the next season of Fairwinds Broadway in Orlando 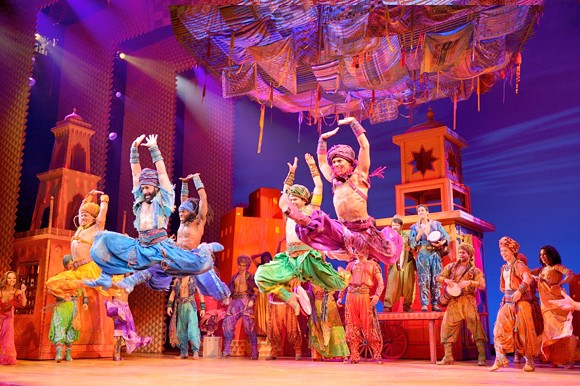 Hamilton is a hard act to follow, but a wisecracking genie and Vietnamese bar girl will attempt to follow in the Founding Father's sold-out footsteps when Disney's Aladdin and Miss Saigon anchor the 2019-2020 Fairwinds Broadway in Orlando season, which will also bring the new musical Mean Girls to the Dr. Phillips Center.

On Valentine's Day, the Dr. Phillips Center for the Performing Arts joined Florida Theatrical Association and Broadway Across America to announce the full line-up of shows scheduled for the 2019-2020 Fairwinds Broadway in Orlando series:

Les Misérables
Oct. 22-27,2019
(Season Option; subscribers will have first access to purchase tickets for once they have renewed their seats for the 19/20 season.)
Alain Boublil and Claude-Michel Schönberg’s Tony Award-winning musical comes direct from a two-and-a-half-year return to Broadway, with new staging and reimagined scenery inspired by the paintings of Victor Hugo. Set against the backdrop of 19th-century France, Les Misérables features the songs “I Dreamed A Dream,” “On My Own,” “Stars," “Bring Him Home,” “One Day More.”

Escape to Margaritaville: The Jimmy Buffett Musical
Nov. 12-17, 2019
This jukebox musical of songs by the papa of Parrotheads — and inspiration behind Kissimmee's new resort hotel — played the Great White Way for several months last spring.

The Play That Goes Wrong
Dec. 3-8, 2019
Broadway & London’s award-winning comedy is described as "what would happen if Sherlock Holmes and Monty Python had an illegitimate Broadway baby." Watch as the opening night performance of The Murder at Haversham Manor becomes hilariously unhinged, thanks to an comatose leading actress, an overactive dead body, and actors who can't remember their lines.

Disney’s Aladdin
Jan. 22-Feb. 9, 2020
The Broadway musical adaptation of the original animated film features familiar songs like "A Whole New World" and "Friend Like Me," as well as new music written by Alan Menken, with lyrics by Howard Ashman and Tim Rice, and book by Chad Beguelin. The show was directed and choreographed by Tony winner Casey Nicholaw, and designed by Tony winners Bob Crowley, Gregg Barnes, and Natasha Katz.

Mean Girls
Feb. 25–March 1, 2020
Based on the classic 2004 teen comedy, the musical version of Mean Girls is scripted by original screenwriter Tina Fey, with songs by Jeff Richmond and Nell Benjamin, and direction by Casey Nicholaw (again).

Miss Saigon
March 31-April 5, 2020
The new production of Miss Saigon, written by the creators of Les Misérables, tells the story of a young Vietnamese woman's encounter with an American G.I. during the fall of Saigon. It features songs like “Last Night of the World,” and “American Dream,” a cast of 42, and one famous flying helicopter.

A Bronx Tale
April 28-May 3, 2020
Chazz Palminteri collaborated with Robert De Niro, director Jerry Zaks and choreographer Sergio Trujillo to turn his autobiographical 1993 film about growing up around mobsters in the 1960s, into a doo-wop musical with songs by Alan Menken.

Lerner and Loewe’s My Fair Lady
May 26-31, 2020
The new Lincoln Center Theater production Lerner & Loewe’s classic, which includes the timeless songs “I Could Have Danced All Night” and “The Rain in Spain,” is directed by Bartlett Sher. It retells Shaw's Pygmalion through music, with a comely Cockney flower vendor transformed into a “proper lady” by an arrogant linguist.

"The 2019-2020 season builds on the excitement and success of last year, our biggest season yet," Dr. Phillips Center President and CEO Kathy Ramsberger says.

"We could not be more proud to partner with the Dr. Phillips Center and FTA to bring the best of Broadway right here to downtown Orlando," says Susie Krajsa, president of Broadway Across America. "The upcoming season is a real treat for Central Florida audiences with a balance of some of the biggest hits in recent years alongside gorgeous revivals of legendary musicals."

Current Fairwinds Broadway series subscribers can renew their seats now through March 15, 2019, with discounted "loyalty pricing" available before. New subscriptions for the 19/20 season are not yet available for purchase, but you can sign up online to be notified when they go on sale.

Group sales (for 10 or more) for next season star today; individual shows in the 2019-2020 season will go on sale later. For more information, visit Orlando.Broadway.com.