Autonomous vehicle company Beep revealed on Tuesday that a miniature, self-driving bus is poised to hit the streets of Lake Nona in the coming months.

Dozens of executives and local officials convened in the Orlando suburb for the announcement and added that Beep will plant its headquarters square in Lake Nona – a burgeoning, 17 square-mile neighborhood in south Orlando billed as one of the newest, fastest growing tech-heavy "smart cities."

"We're looking at this being very much around the corner," Beep co-founder Kevin Reid said Tuesday, adding that the company plans to deploy its first two autonomous shuttles this spring.

Orlando Mayor Buddy Dyer and Orange County Mayor Jerry Demings took the stage in front of a modeled AUTONOM Shuttle, as the buses are known, in Lake Nona for the announcement.

AUTONOM can seat up to 15 passengers and travel no more than 16 miles per hour, according to Beep. The shuttle is supplied by French company Navya, whose representatives also flocked to Lake Nona to announce it had chosen Beep as a partner on the project. Both Beep and Navya are contracted by Lake Nona owner and prime developer Tavistock Group, an investment firm controlling assets in various land development projects and energy and oil ventures.

"The roads and the transportation grids that we obsess about is like an iPhone, and what we're announcing today is like all the apps," said Rasesh Thakkar, senior managing director of Tavistock Group. "An iPhone without the apps is just a phone – a road without pioneering applications is just a road. And today we're announcing our newest apps."

Thakkar continued, detailing an initiative he called "Move Nona," which includes "a menu of transportation options that range from shared bicycles and car share programs with teslas."

The self-driving nature of AUTONOM is powered by machine-learning, an increasingly popular strain of artificial intelligence that literally learns information much like humans do.

"Every time we commission one of these we have to teach it the route that we run," Reid said.

The buses will map out a route using GPS and adapt to its surroundings using sensors and cameras installed on its exterior – key instruments for detecting pedestrians, roadblocks or any sort of intrusion to the norm.

After it learns to navigate the Lake Nona route, Reid said, AUTONOM will pull stronger experience from a broader, more connected network of buses already operating across the country. Using this AUTONOM hive mind, so to speak, the obstacles those buses are able to machine-learn amplifies the performance of Lake Nona's buses.

"We're not anticipating that this is gonna be a very lengthy process at all," Reid said. 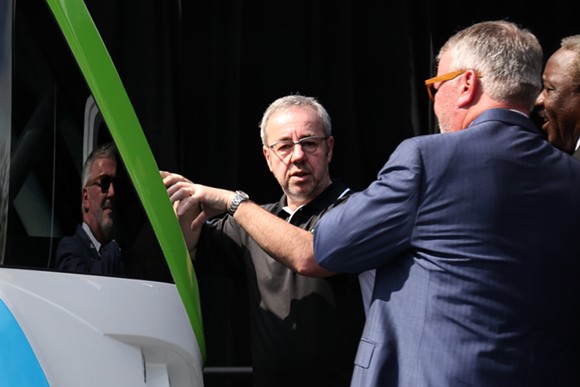 And as the Beep shuttle learns the ins and outs of Lake Nona's freshly paved roads, so, too, will lawmakers learn of AUTONOM's reliability. Beep is working in tandem with local and federal lawmakers to develop a regulatory environment for budding technologies like machine learning that drive AUTONOM.

"Autonomous vehicles are going to prove to be safer than vehicles with drivers," Dyer said, adding that while more testing is always needed, AUTONOM's sensors – which "can't be distracted" like human drivers – will ultimately prove to be more effective and safer for roadways.

Dyer wouldn't say whether AUTONOMs will make their way to Downtown Orlando but said City Hall is studying plans to make LYMMO buses autonomous. Beep is in ongoing talks with the city to expand AUTONOM's network beyond Lake Nona, according to Reid and another Beep executive attending Tuesday's announcement.