The University of Central Florida Board of Trustees voted on Thursday to accept the resignation of president Dale Whittaker amid an investigation into the school's misuse of $85 million in leftover state funds.

The vote follows an emotional, three-hour board meeting on UCF's main campus in which dozens of students and faculty members voiced fervent support for Whittaker, who just six months after taking office found himself entangled in a controversy that led to the termination of four employees, the resignation of a board trustee and an onslaught of criticism from state lawmakers critical of the administration's culture of accountability.

During the investigation, which is ongoing, the public grappled to understand a central dilemma: whether an illegal use of funds for an purportedly ethical cause warranted the removal of the university’s fifth president, and whether vital relationships with Florida's Capitol hinged on that removal.

"It’s a tragedy for UCF that we're losing him," Board chairman Robert Garvey said, echoing the views of other trustees who praised Whittaker as a leader with integrity. Yet, most members agreed that in order to "heal new wounds" with lawmakers, as Garvey put it, Whittaker must step down.

"Our loss will be some other great university's gain," Garvey said. 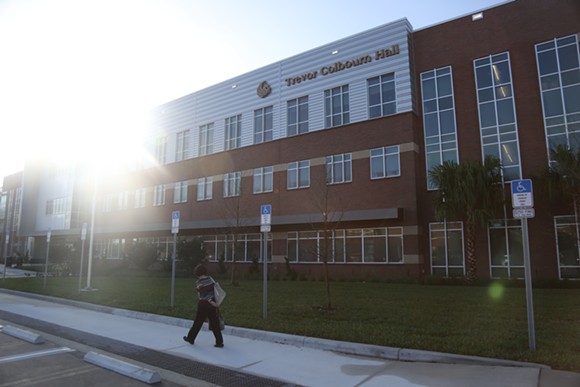 Trustee Robert Self, one of three trustees who voted to keep Whittaker as president, called on lawmakers to more strongly support the state university system and advocate for a "stronger" UCF.

"It’s a sad day, I'm worried about instability, but I know we’ll be strong," Self said.

Trustee Alex Martins called Whittaker "a leader of high character, integrity – a visionary" and voted to accept his resignation, saying "clearly, mistakes have been made… but we have a responsibility as a board to correct these mistakes."

Those mistakes centered on a decision to use $38 million in funds spilled over from the previous year to build Trevor Colbourn hall, a new three-story headquarters for 24 university departments on campus. There were plans to use $47 million more for other projects as well, putting a total of $85 million in auditors' crosshairs. The move violates state law, but some say that since the building was a much needed replacement of an older, decrepit one, the funding could have been legally justified.

Aubrey Jewett, an associate professor of politics at UCF, said the legislature is "somewhat responsible" for the mess.

"They did not provide a reliable source of money to replace the steadily diminishing PECO funds traditionally used for [new buildings and infrastructure] and yet still expected the universities to accept more students and figure out a way to build new buildings and replace older unsafe buildings," he said.

"And of course the Legislature is hypocritical in that they often have used earmarked funds for different projects then originally intended, like the practice of sweeping up money designated for low income housing," Jewett added, referring to how lawmakers divert funds from the Sadowski Affordable Housing Trust Fund for other unrelated projects – something that’s legal for the state but illegal for universities.

"I think that if Dr. Hitt was here, his reaction would not have been to blame people first, it would've been to seek answers first," Greene said, adding that the core problem is the university’s failure to train employees on spending rules. "I think he probably needs to resign because he did adopt a strategy of blaming people."

But for many UCF students, Whittaker’s departure felt like an injustice.

Students and faculty members throwing support for the president occupied much of the 90 minutes allotted for the meeting’s public input portion – six times longer than normal portions. Mary and Erin Whittaker, the president's wife and daughter, took the mic, as well as a group of Whittaker’s own office staff. "In my eyes it seems that the state legislature is acting as a bully to force its agenda,” Erin Whittaker said. Her mom, Mary Whittaker, followed, saying "I stand her before you today to make this crystal clear: Provost Dale Whittaker was not responsible or accountable for facilities funding decisions."

The board also approved trustee Garvy's term to last until July, which is around the same time UCF's next president should be selected.