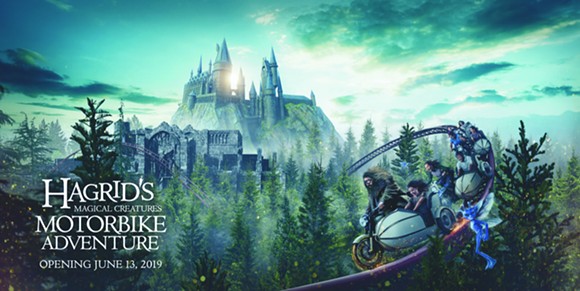 Nearly a year and a half after closing Islands of Adventure's iconic Dragon Challenge roller coasters, Universal Orlando has finally unveiled the name of their Harry Potter-themed replacement: "Hagrid's Magical Creatures Motorbike Adventure."

The ride will officially open June 13, 2019, according to Universal.

The newly named attraction, which will be located inside The Wizarding World of Harry Potter – Hogsmeade on the plot of land that originally held Dueling Dragons, is an Intamin-constructed family-friendly roller coaster.

The track has no giant hills or upside-down loops, but does feature multiple launches and innovative maneuvers, including vertical and backwards segments, along with an indoor elevator-style drop.

In keeping with the attraction's title, the ride vehicles will be styled after Hagrid's motorbike and sidecar. Guests will have a choice of sitting up on the motorcycle, or settling down into the passenger seat. Along the way, guests will see "some of the wizarding world’s rarest magical creatures," which are expected to be represented as animatronics (as opposed to 3D screens).

Universal set June 13 as the official opening date, but odds are good that unannounced technical rehearsal previews could happen in the days or weeks leading up to the debut day. The summer debut will give Universal's ride several months in the spotlight before Walt Disney World's anticipated Star Wars: Galaxy's Edge premieres near year's end.