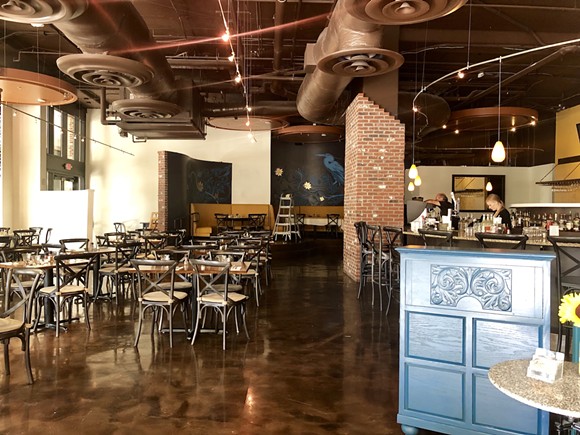 Artisan's Table is holding a soft opening Monday at their new location in the 55 West building, 55 W. Church St.

The downtown Orlando mainstay moved this month from their old spot at 22 E. Pine St. A blackboard outside the restaurant says they have a full lunch menu and a happy hour until 7 p.m., and they're open from 11 a.m. to 10 p.m.

On Feb. 9, Artisan's owners posted on Facebook that they had to deal with a major flood in the new building, which was originally supposed to open on Feb. 15.

"Nothing will keep this new restaurant from opening," the Facebook post said. "After a major flood in the building this morning the [Orlando Fire Department] sent over a bunch of guys to help us squeegee the water out! They were so kind and helpful!"

Artisan's executive chef and managing partner Monica McCown previously told Orlando Weekly that the new restaurant would have a larger bar area, which definitely seems to be the case.

"The main advantage is the exposure," McCown told OW last year. "We're excited about the foot traffic, and the synergy we can create with the other restaurants on West Church."

McCown also told OW that the new Artisan's Table will focus on late-night hours, for both bar service and food.

Now, go on and get that breakfast latte you've been craving for weeks.