Disney's plan to fix Epcot could take a decade. Here's what that will look like

Ever since Disney announced the massive update to Epcot at the 2017 D23 Expo, there has been speculation on what exactly it will entail.

The multi-year refresh of Walt Disney World's second theme park will be done in phases, with most of P One now confirmed by the company.

The long-rumored update to the entrance plaza was finally announced last week. Bringing back the green spaces and a fountain inspired by the park's original entrance one, this area should see improved crowd flow, more vegetation and more shade.

What wasn't mentioned in last week's press release but will be part of this entrance overhaul is an improved front gate and security checkpoint.

Disney did indicate that the area outside of the front gate will be changed by confirming the "Leave a" will be moved to this area, but gave no other details regarding it.

The "Leave a Legacy" metal-etched photo plates were part of the park's Millennium Celebration, though thousands of photo spots remained unsold after the project closed in 2007. But according to a contract that guests signed when paying for the images, the "Leave a must stay on display somewhere on Disney property for at least 20 years, meaning these photos must remain until at least 2027.

Despite some reports, Disney has not confirmed that the granite monoliths the images are currently attached to will be part of the move. Expect only the photo plaques themselves to actually make the move. The updated entrance area is also being designed with Disney's long-term goal of better securing transit systems across the resort. Eventually, all major transit systems resort-wide will be placed behind security checkpoints.

Most of Future World East's updates have also already been confirmed, with the new Guardians of the Galaxy roller coaster replacing Universe of Energy; a new play-themed pavilion in the former Wonders of Life; a Space themed sit-down restaurant, likely named Space 220, attached to Mission: Space; as well as an Epcot preview center in the old Odyssey restaurant.

The only pavilion in Future World East to not receive a major update will be Test Track, but rumors point to a new facade and other small upgrades there, with most of the focus on an updated post-ride area.

While Mission: Space does have a family-friendly green option, Future World East is becoming the thrill section of Epcot with three of the fastest and most extreme rides in all of Walt Disney World.

To offset this thrill corner, and to give parents somewhere to go when other family members are in line for the thrills, a new play pavilion will replace Wonders of Life.

Little is officially known regarding this new pavilion, but it's understood to be an updated version of Innoventions with multiple attractions and prototype-style exhibits spread across the domed space. The dome itself should receive an update, possibly with projection mapping effects to enhance the whimsical, design-thinking inspired pavilion. 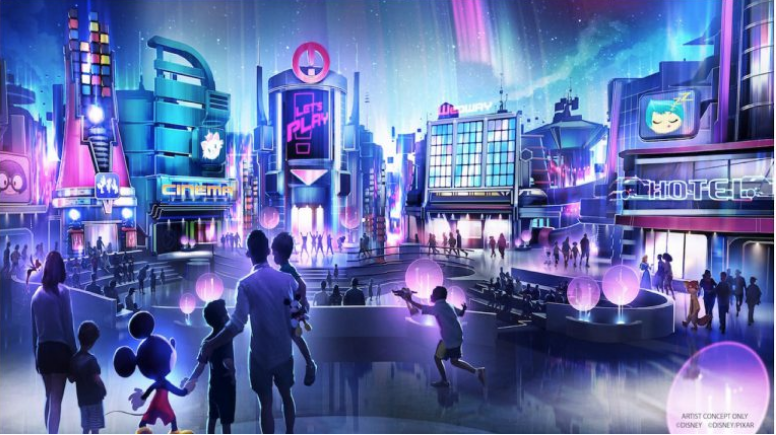 In renderings announcing the new pavilion, a live performance theater and a cinema, likely home to a 3D attraction, can be seen. Multiple character meet-and-greets, retail and possibly a quick-service dining option will also be found in the indoor pavilion. Characters from both Disney films and from Epcot itself are rumored to be included in this new space.

All of these Future World East updates should open in time for the WDW 50th Anniversary celebration, which will kick-off in 2021. By that same time, we will see other aspects of Future World well underway, according to multiple insiders.

The entire "spine" of Future World between Spaceship Earth and the World Showcase lagoon will see some of the most dramatic updates any WDW park has ever undergone.

The Innoventions West building is rumored to be slated for a complete leveling.

A now slightly out-of-date artist concept of the new Future World that was quickly shown at the 2017 D23 Expo had more of both Innoventions buildings missing. It now seems like only the West building will be completely leveled, with the East one partly remaining, though it will be a different part than the early concept art showed.

Having this building remain is likely due to the extensive network of park support and back-of-house mechanisms that are connected to the East building. The new entrance rendering released by Disney last week seems to confirm this with the West building completely missing from the background while a smaller building can be seen where Innoventions East is currently located.

MouseGears should be staying but will receive a much-needed complete overhaul that will make more ADA-friendly and bring in cutting-edge technology for use in merchandise displays.


This area in the center of Future World may be known as the "Gardens of Wonder."

The new quick-service dining option inside the play-themed pavilion might be the replacement for The Electric Umbrella, which is rumored to be closing as part of the Gardens of Wonder update. The Starbucks found in Innoventions West will also be moving, though it is unclear where exactly the new location will be located.

Club Cool will be closing, according to Martin on the WDWMagic Forums, though a new site might be found somewhere else within Epcot if Disney can negotiate a sponsorship that includes it.

Spaceship Earth won't be spared from the Future World overhaul, either.

A complete retracking of the ride and a full reimagining of every scene after the Printing Press will force the flagship attraction to close for two to three full years. This would mean the ride would be down for the WDW 50th Anniversary celebration in 2021.

The all-embracing ride update will also see a new load and unload area that allows for easier ADA access.

The rear of Spaceship Earth (the side visible from the lagoon) will also be updated to correspond with updated nighttime entertainment offerings, though the rumors of LED panels being attached to the building seem to have been met with fan outrage, possibly causing those plans to be canceled.

Despite being now slightly outdated, the previously shown Future World concept art did give some hint to the rumored Future World specific entertainment offerings that can be understood as Epcot's version of Animal Kingdom’s Tree of Life Awakenings. 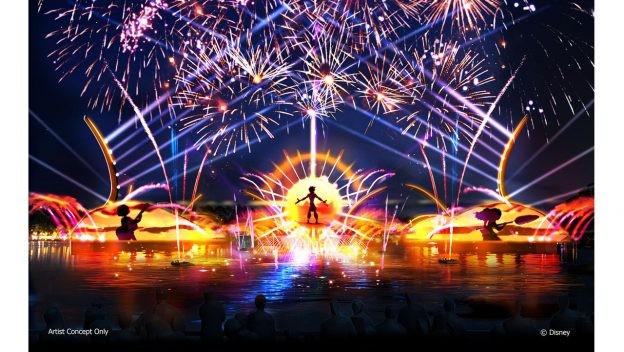 Disney has confirmed a new signature nighttime show will replace IllumiNations: Reflections of Earth. A temporary show celebrating Epcot's history will start just after Reflections of Earth closes this fall and will run until just before the new show debuts next year. The Disney Parks Blog explains that this new show debuting next year "will celebrate how Disney music inspires people around the world, and will feature massive floating set pieces, custom-built LED panels, choreographed moving fountains, lights, pyrotechnics lasers." Construction has already begun in the World Showcase lagoon preparing for the new show.

Also already confirmed is the trackless, screen-based Ratatouille ride coming to the France pavilion. A Beauty and the Beast sing-along will be headed to France as well, using the pavilion's current theater. China will be receiving a new Circle-Vision 360 film, likely featuring characters from Mulan, as will Canada. Plus, a new sit-down restaurant is already under construction in the Japan pavilion. All five of these projects should open before or during 2021 as part of Phase One of Epcot’s overhaul.

A Coco overlay to the boat ride in Mexico has been rumored off and on for some time. Disney might be using some upcoming Coco entertainment offerings as a way to decide if this film is popular enough to warrant the update.

Then there are the rumors of an entirely new World Showcase pavilion. Both Spain and India have been floated as possibilities, but the most likely Brazil.

Food will be the primary focus of the new pavilion, with a churrascaria and a booth selling street foods both rumored. A dark ride of some type is also rumored, though details on what it will entail still seem to be undecided.

The 2011 conservation-focused kids movie Rio is a possible contender for the intellectual property attached to the ride. If this is, in fact, the franchise selected for the new attraction, it could be the first major use of 20th Century Fox-owned property in a Disney park.

Previous rumors of a hotel near the entrance of Epcot that would overlook Future West now also seem paused as the company watches DVC sales at the new Reflections – a Lakeside Lodge and the new Rivera resorts, the first two properties to open after the major overhaul to the DVC program that was announced earlier this month.

Future World West will be receiving the least amount of updates as part of the Epcot reimagining. The Imagination Pavilion should see an overhaul after the kid-friendly Play pavilion opens, though at this time it's unclear what exactly will happen to this space.

The Land will see minimal updates. A new film is possible for Soarin', the third since the attraction opened, that might see randomization similar to that used on Star Tours. The Living With the Land boat ride might see some new references to earlier versions of the attraction with the original soundtrack possibly returning and new opening and closing scenes. Like other areas in Epcot, such as the new Guardians attraction, a large retail space is also likely, as is a new entrance that is designed to better accommodate crowd flow.

The 33-year-old Seas aquarium is beginning to show its age, having issues in both guest and backstage areas. Despite rumors of the aquariums moving to Kingdom, there is no indication of Disney actually planning to do this. As mentioned here last year, Disney has sent out guest satisfaction surveys regarding this pavilion that point to their interest in possibly updating it. Hoping to steer clear of the animal captivity issues that have plagued SeaWorld, Disney seems to have no plans to bring in new dolphins once current ones at the Seas pavilion pass away and may move the current ones to another facility.

Rumors a new attraction of some sort for the pavilion have been around for years, yet the future of this pavilion remains the least known in all of Epcot.

Future World West is thought to be the final phase in the Epcot overhaul since it requires the fewest improvements, likely explaining why details on the updates to this section of the park are less known than other areas.

With most of Epcot's Phase One overhaul now confirmed by Disney, the primary focus will be on the Future World focused Phase Two. Spaceship Earth's closing will probably be the first significant announcement regarding this upcoming phase with the closure expected to take place sometime next year, likely just after the opening of at least one of the two new rides currently under construction in the park. Both the updated Spaceship Earth and the spine/Gardens of Wonder are expected to be finished within the next five years.

A name change back to Epcot Center might also be in the works, though it's unclear if and when this would take place. In the renderings of the entrance released last week, multiple flags featuring the retro logo for Epcot Center are seen circling the entrance plaza.

The entire park overhaul may take nearly a decade to complete with cost estimates of more than $2 billion.