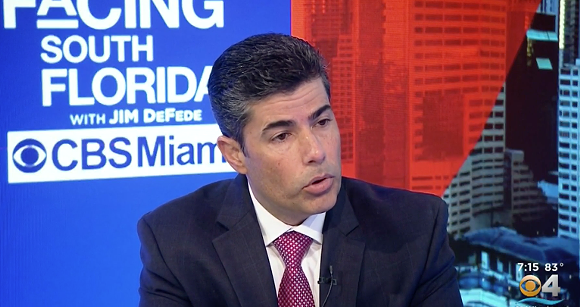 It wasn't a simple slip of the tongue, either – Oliva, R-Miami Lakes, referred to pregnant women as "host bodies" five times throughout the interview.

"It's a complex issue because one has to think, well there's a host body and that host body has to have a certain amount of rights because at the end of the day it is that body that carries this entire other body to term," said Oliva, a self-described small government-enthused conservative. "But there is an additional life there. And the question that we have to ask ourselves is: What is the limit to which we are going to give one person complete power over the life of another?"

Abortion is a "complicated issue" that Oliva says he wishes would "fit neatly into libertarian thinking the way a lot of other things do." Maybe he hasn't read Ayn Rand, whose philosophy of Objectivism was a major influence on  modern libertarianism. She wrote in 1968 that "abortion is a moral right – which should be left to the sole discretion of the woman involved."

Oliva sat down with DeFede to talk anti-abortion measures that were introduced ahead of next week's legislative session kickoff.

Among the measures is a bill that prohibits a pregnant woman from getting an abortion if a physician detects a fetal heartbeat – which can be detected as early as six weeks into a pregnancy, before a woman may even be aware that she's pregnant. The love-child of state Rep. Mike Hill, R-Pensacola, the proposal would also force doctors to offer pregnant women the opportunity to view or hear the fetal heartbeat and present statistical data regarding the probability of survival.

"With all due respect Mr. Speaker, my body is not a 'host' and personal medical decisions around my pregnancy belong to me, my family, my doctors and my faith – not politicians," writes state Rep. Anna Eskamani, D-Orlando, on Twitter.

Other Florida Democrats followed suit in calling out Oliva.

"Speaker José Oliva's words are hurtful, dehumanizing and misogynistic," says Florida Democratic Party Chair Terrie Rizzo. "With the start of the legislative session just days away, Speaker Oliva has insulted Florida women – and made clear he will not be their champion in Tallahassee."

In response to the blowback, Oliva issued an apology on Friday.

"In a recent interview where the very controversial topic of abortion was raised I used the term 'host' to describe a pregnant woman," Oliva writes. "It was an attempt to use terminology found in medical ethics writings with the purpose of keeping the discussion dispassionate. The reaction undoubtedly shows it had the exact opposite effect. I apologize for having caused offense; my aim was the contrary. This is and will continue to be our societies [sic] greatest challenge. I strongly believe both mother and child have rights and the extent and balance of those rights remain in question."