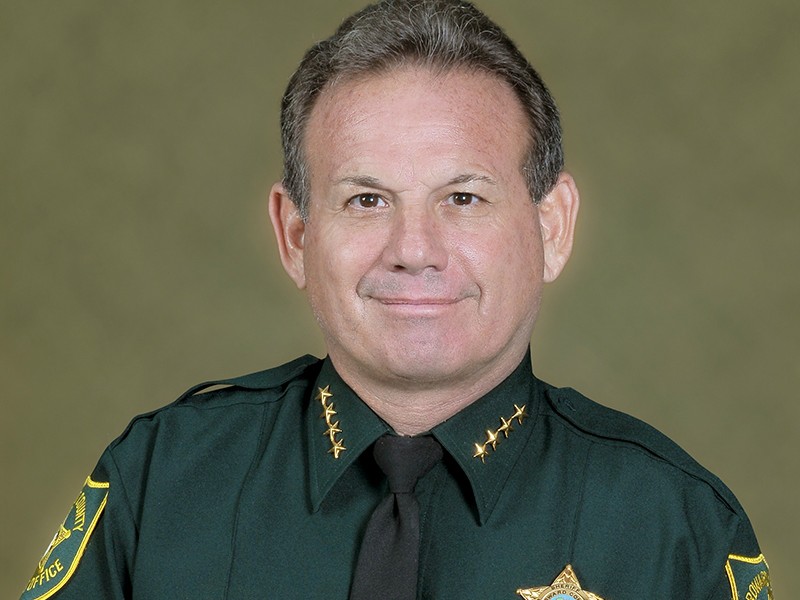 Gov. Ron DeSantis is accusing suspended Broward County Sheriff Scott Israel of being responsible for the deaths of 17 students and faculty members at a Parkland high school and five other victims of a mass shooting at an airport, according to documents filed this week with the Florida Senate.

The allegations against Israel, whose suspension was one of DeSantis’ first actions after the Republican governor took office in January, were included in what is known as a “bill of particulars” as Israel tries to get his job back.

Israel has appealed the suspension to the state Senate, which has the authority to reinstate or remove elected officials. Senate President Bill Galvano appointed former Rep. Dudley Goodlette, a Naples-area Republican, to serve as special master in Israel’s case and in an appeal by suspended Okaloosa County Superintendent of Schools Mary Beth Jackson, who was also removed by DeSantis.

The bill of particulars in Israel’s case, filed Monday by DeSantis lawyer Nicholas Primrose, includes specific allegations related to the Feb. 14, 2018, massacre at Marjory Stoneman Douglas High School in Parkland and a Jan. 6, 2017, attack at the Fort Lauderdale-Hollywood International Airport.

“Mr. Israel neglected his duty and/or was incompetent in failing his paramount statutory responsibility to be the ‘conservator of the peace’ in Broward County,” in violation of Florida law, Primrose wrote in the 14-page document.

The bill of particulars also charges Israel with “failing to protect the life” of each of the 22 shooting victims, identifying them individually by name.

But the allegations drew an angry response Thursday from Israel’s attorney, Benedict Kuehne.

The “scandalously false allegations that the sheriff is responsible for the deaths of any of these victims is outrageous,” Kuehne told The News Service of Florida in a telephone interview.

“At a time when the governor was a candidate and a member of Congress doing nothing to promote the health, welfare and safety of people in the state of Florida and throughout the nation, our sheriff was working diligently with his office to protect the people of Broward County. And for a governor, from his perch in Tallahassee, to contend, essentially, he would have done better makes a mockery of the dedication of law enforcement officers,” Kuehne said.

DeSantis suspended the embattled sheriff shortly after a state commission created to investigate the Parkland massacre —- one of the nation’s worst school shootings —- released a report finding fault with how Israel’s office handled the attack by confessed gunman Nikolas Cruz, a former student at the school with a long history of mental health problems.

As Cruz unleashed a volley of bullets inside what was known as the freshman building, the high school’s resource officer, former sheriff’s Deputy Scot Peterson, lingered outside. Other deputies hid behind cars. The delays, along with a lack of training, communication problems and Israel’s policy that did not require deputies to confront active assailants, contributed to the number of deaths and injured victims, the commission found.

Israel “is solely responsible for the negligence of the deputies he appointed,” one of the allegations in the Senate document said.

Other allegations focused on Israel’s active-shooter policy, which “resulted in additional fatalities” at the Parkland school.

“From the time Deputy Peterson arrived at Building 12, his failure to enter the building and/or engage the gunman resulted in seven additional fatalities and almost a dozen more wounded students and faculty,” Primrose wrote, detailing one of the charges against Israel.

Seven other deputies arrived at the campus, heard gunfire and did not enter the building or engage with Cruz, also resulting in additional fatalities or injuries, Primrose added.

The document also accuses Israel of failing to adequately train his deputies, as evidenced by the attacks on the airport and the school.

“The lack of frequent and effective trainings by Mr. Israel was exposed during two separate mass casualty events within a one-year span of time that resulted in the deaths of 22 individuals,” the allegations said.

Israel, a Democrat first elected in 2012, has fiercely insisted he is innocent of any wrongdoing and has accused the Republican governor of removing him from office to fulfill a campaign pledge.

“The governor’s bill of particulars, as expected, is merely another press release designed to curry favor with those people to whom he made his campaign promise,” Kuehne told the News Service. “The document itself is not a bill of particulars. The document itself contains not a single reference to any legally binding duty that was neglected, any legally binding standard to which the sheriff failed to measure. Instead, it is an effort to say, ‘I disagree with the sheriff and I have the power to remove him.’ That is precisely what we knew from the beginning this case was about, and the bill of particulars is proof of that.”

Kuehne, who requested the bill of particulars during a Feb. 19 case management conference, railed about the allegations blaming the deaths of the 17 Parkland victims —- 14 of whom were students —- on Israel, who has said he intends to seek re-election next year.

“To say in writing, as a statement of the governor of the state of Florida in an official proceeding, that the sheriff is responsible for the tragic deaths of these children and adults at the hands of a shooter that the justice system will decide culpability is just outrageous. There’s no word to describe what the governor’s official writing is, other than an unacceptably unjust accusation,” Kuehne said.