An Orlando lawmaker is calling for a November election referendum on a proposal to create a new town in east Orange County called "Preservation."

State Rep. Rene "Coach P" Plasencia, R-Orlando, filed HB 1087 last month in response to years of growing discontent among east Orange County residents fiercely opposed to two major developments that would have added thousands of homes to the area. Conservation advocates say they want to maintain the rural character of the area east of the Econlockhatchee River.

"Population growth and lack of planning and political representation allowed urban sprawl to encroach on this area," says a feasibility study for the town. "This explosive growth led to gridlocked roads, diminished rural community characteristics, declining access to existing county services, and increased citizen demand for community services, which decreased the quality of life for local area residents." 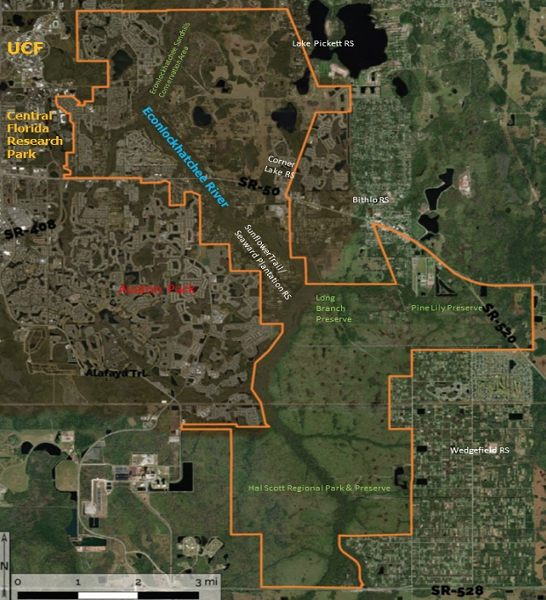 The town that could form near Avalon Park would include communities like Lake Pickett, Corner Lake and some parts of Bithlo. The majority of the town, though, would consist of preservation lands, including the Long Branch Preserve, Pine Lily Preserve, and the Hal Scott Regional Preserve and Park.

Preservation's potential geographic area would rival Maitland and its population would be an estimated 17,500 residents, according to the Orlando Sentinel.

"Coupled with its desirable location and low property tax rates, the Town of Preservation is expected to prosper," the feasibility study says. "This proposed town will differ from other municipalities by emphasizing quality of life for residents, preservation of a more rural lifestyle, and maintenance of ecosystem services, while simultaneously encouraging sustainable population and economic growth."

Plasencia's bill includes Preservation's charter and requires a majority of residents within the limits of the proposed town to vote on a 2019 referendum on the future of the municipality. If the referendum passes, Preservation would be created and established by Dec. 31, 2019.