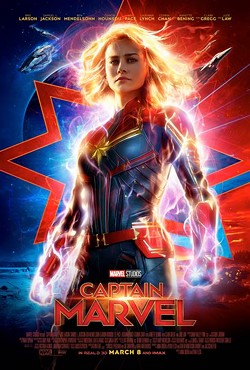 The latest lightning-rod litmus test in our increasingly annoying culture wars is a comic book film whose lead character flies through space in a scuba suit and shoots plasma out of her palms. So if you are the type of person who has no problem emotionally investing in a talking raccoon or neck-bearded fish-whisperer, but refuses to give Marvel’s first-ever titular heroine a fair shake simply because Brie Larson would like to periodically field a press query from someone who doesn’t look like me, please feel free to skip ahead to the final paragraph, where you’ll find the only information you’re really interested in.

For those readers remaining, Captain Marvel introduces audiences to Vers (Larson), a blue-blooded “noble warrior hero” in the technologically advanced alien Kree empire. [For the record, she’s a totally different character from D.C.’s Shazam, previously known as Captain Marvel, who is being played by Zachary Levi in an upcoming film.] While on a McGuffin mission with her subtly undermining mentor Yon-Rogg (Jude Law at his smarmy best) and a wisecracking crew of multi-hued comrades, Vers is kidnapped by Talos (Ben Mendelsohn, Marvel’s most engaging antagonist since Tom Hiddleston’s Loki), leader of the shapeshifting Skulls. She’s tortured for information about a previous life she’s unable to remember, then rescues herself only to crash-land into a Blockbuster Video on Earth circa 1995.

After a fairly confusing, flashback-fractured first act, Captain Marvel finally finds its footing once Larson teams up with Samuel L. Jackson, playing a pre-eyepatch Nick Fury with the eerily effective assistance of digital de-aging. The pair buddy-cop their way through a complex conspiracy chock-full of callbacks to the earlier phases of Marvel’s Cinematic Universe, pausing periodically to poke fun at grunge fashion and the internet's awkward Altavista era.

There are a couple of genuinely surprising twists in the Secret Wars-influenced plot that I wouldn’t want to spoil. But the movie's true heroine’s journey is about Vers' struggle to reclaim her own identity and embrace her inner badassness, despite aggressive gaslighting from the powers-that-be; a message that – while occasionally delivered with a heavy hand – is certain to resonate with more than half of the population. And I’m secure enough to admit that the little girl inside me let out a cheer when Larson finally fully flexed her muscles (making Iron Man look like an unwound tin toy) during the obligatory slam-bang finale.

Captain Marvel isn’t as aesthetically accomplished as the breathtaking Black Panther, and it seeks to expand the genre’s established tropes, rather than attempt to upend them as the anarchic Spider-Man: Into the Spider-Verse did. But even if it didn’t change my life, as a [full disclosure] straight cis Caucasian with a Y chromosome, I enjoyed the film as a satisfying pro-empowerment romp. With a balance of Winter Soldier-style paranoid thrills and Guardians of the Galaxy-esque sci-fi goofiness – plus a splash of anti-patriarchal subversion to boot – Captain Marvel lives up to her billing as the heroine we need right now, even if she’s not one fragile fanboys deserve.

Non-SPOILER ALERT
There’s an eye-moistening tribute to Stan Lee during the opening credits, plus a cameo that will make Kevin Smith fans chuckle. And there are two scenes during the credits: one that leads into April’s Avengers: Endgame, and a hilarious coda featuring Goose, the scene-stealing orange cat who deserves his own Disney+ series ASAP.