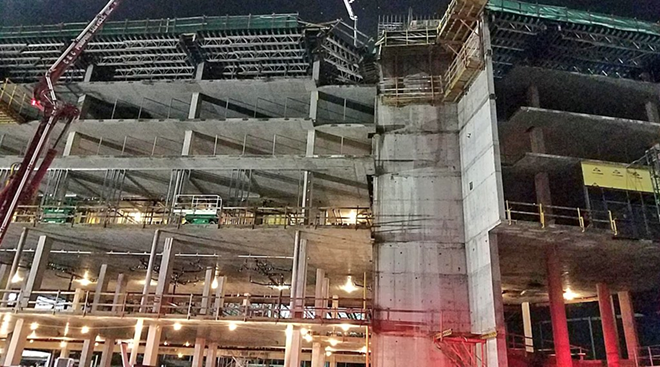 Two Orlando companies are facing more than $157,000 in fines after federal labor officials cited them for safety violations in the 2018 deaths of two workers who fell to the ground at the JW Marriott hotel construction site.

Lorenzo Zavala, 34, and Jerry Bell, 46, were pouring concrete Aug. 29 on the seventh floor of the new hotel on Chelonia Parkway when the scaffolding support structure collapsed, according to the U.S. Department of Labor's Occupational Safety and Health Administration (OSHA).

Zavala and Bell plunged about 80 feet to their immediate deaths. A third worker managed to hang on and climbed to safety with minor injures.

OSHA officials say the two Orlando contractors in charge, PCL Construction Services Inc. and Universal Engineering Sciences, failed to properly inspect formwork, shoring, working decks and scaffolds on the project prior to construction. PCL Construction Services, in particular, failed to "design, fabricate, erect, support, and brace the formwork so that it was capable of supporting vertical and lateral loads," according to OSHA.

Orlando Weekly reached out to PCL Construction Services Inc. and Universal Engineering Sciences for comment but did not receive an immediate response.

PCL Construction Services, which was hit with three violations, was fined $144,532, while Universal Engineering Sciences is being ordered to pay $13,260 for two violations, for a total of $157,792 in proposed penalties.

OSHA officials also issued a hazard alert letter to the two deceased workers' employers, Puleo’s Concrete Inc. and C&C Pumping Services Inc., to recommend they develop a workplace policy that makes sure contractors have installed shoring equipment according to the most recent drawings.

The companies have about two weeks to comply with the fines, request a conference with OSHA or contest the findings before the independent OSHA commission.