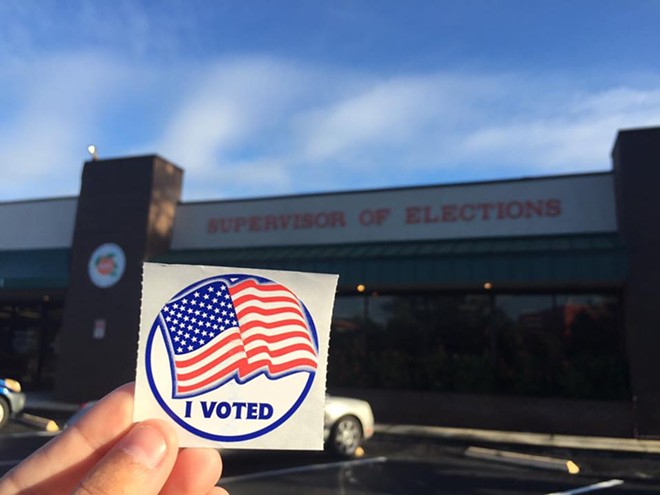 Hookers who’ve been convicted of prostitution three times, cyberstalkers and inmates who expose themselves to prison workers wouldn’t be eligible to have their voting rights automatically restored, under a House proposal aimed at carrying out a constitutional amendment approved in November.

The constitutional amendment, which appeared on the ballot as Amendment 4, granted “automatic” restoration of voting rights to felons “who have completed all terms of their sentence, including parole or probation.” The amendment excluded people “convicted of murder or a felony sexual offense.”

But state and local elections officials, as well as clerks of court and prosecutors, are relying on the Legislature to provide guidance about the exceptions. They also want to know what conditions must be met for sentences to be considered complete.

The House Criminal Justice Subcommittee is scheduled Tuesday to take up a proposal (PCB CRJ 19-03) that would define “murder” as first-degree and second-degree murder, but does not include attempted murder or manslaughter, offenses that backers of the amendment maintain were not intended to be considered exceptions to the automatic rights restoration.

But the House plan captures dozens of sex-related offenses, such as human trafficking and locating an adult entertainment store within 2,500 feet of a school.

House Criminal Justice Chairman James Grant, R-Tampa, told The News Service of Florida he instructed staff to include all felony sex offenses in the legislation.

“When the Constitution says ‘felony sex offenses’ and that means nothing legally, the best I can do is propose a list of felonies that are sexual,” Grant, a lawyer, said. “The reality is I’m going to do my best effort to maintain what I believe the rule of law now requires in a super-ambiguous constitutional amendment.”

The House proposal’s definitions of what it means to have completed a sentence could also be controversial.

Some of the constitutional amendment’s proponents believe it does not require full payment of restitution, because such a requirement was not specifically mentioned in the amendment. Other officials maintain restitution and issues such as mandatory drug testing or school attendance should be considered components of sentences if they are included in judges’ sentencing orders.

The bill would require felons who’ve fulfilled prison or jail sentences, as well as parole or probation, to pay off any “financial obligation arising from felony conviction,” unless the payment recipient has waived the debt. A financial obligation continued through a civil judgment, such as a lien, would also have to be paid off before a felon could be considered eligible to have his or her voting rights “automatically” restored.

And before inmates are released, the proposal would require the Department of Corrections or county jail staff members to provide “an accounting of all outstanding financial obligations imposed by a court, the department, or the Florida Commission on Offender Review” for each felony conviction.

The House measure “expands what it means to complete your sentence,” according to Neil Volz, the political director of a committee that backed the amendment.

“We’re opposed to restricting voting rights for friends, neighbors, family members who are eligible to vote because of Amendment 4. This bill does that,” Volz, whose right to vote was restored following passage of the amendment, said in a telephone interview Monday.

The measure would restrict voting rights in a variety of ways, he said.

“We believe the sentence is given to you by the judge at the time of sentencing,” Volz said.

But under the House proposal, “a financial entity” or a Department of Corrections employee could “attach sentence obligations after a judge has already imposed a sentence,” Volz said.

“So somebody who works for the government or works for a financial organization can determine whether somebody is eligible to vote in the state of Florida. We think that’s wrong and we’ll fight it,” he said.

Court costs, fines and fees are not considered part of a sentence unless specifically ordered as restitution by the judge at the time of sentencing, according to the clemency processes currently used by the Florida Commission on Offender Review, Volz said.

“We think it’s important to acknowledge that there’s a process right now and there’s discussion to change it and restrict voting in the process,” he said.

According to one state analysis of the amendment, the constitutional change could open the door to voting for more than 730,000 felons in Florida, some of whom began registering to vote after the amendment went into effect in January.

Grant acknowledged the proposal is likely “to get pushback everywhere,” but blames the amendment’s own language for its problems.

“This notion of making policy in the Constitution is problematic for a lot of reasons, and this (Amendment 4) is a great of example of why,” he said.

The Senate has heard from elections officials, prosecutors, clerks of court and others on the issue, but has not yet released its version of an implementing bill.

Whether the amendment requires implementing legislation is also the subject of debate. Gov. Ron DeSantis is among those who believe legislation is necessary, but backers of the amendment —- which required Florida Supreme Court scrutiny to get on the 2018 ballot —- believe it is self-executing.

“Every single justice approved that language,” Desmond Meade, president of the Florida Restoration of Rights Coalition, said in a recent interview. “Let’s be clear. Every single justice, who were appointed by various governors, said that the language was very clear, it was not confusing. We think the language speaks for itself. The people who are excluded are people who commit murder and people who commit felony sexual offenses.”