The YMCA of Central Florida released new designs of the family center planned for Orlando's Packing District in a Tuesday announcement about the development team that will lead the construction of its 23rd location.

General contractors for the two-story, 27,000-square-foot family center will include Brasfield & Gorrie, engineering firm GAI Consultants and architecture firm RLF. Foundry Commercial will design and build the structure, according to a news release from YMCA of Central Florida.

"This team will work diligently to create an innovative YMCA experience that will serve as a beacon for the residents of the surrounding community and neighborhoods," says Dan Wilcox, president and CEO at the YMCA of Central Florida. "We will create a welcoming place where neighbors are connected, lives are improved and our region is strengthened for generations to come." 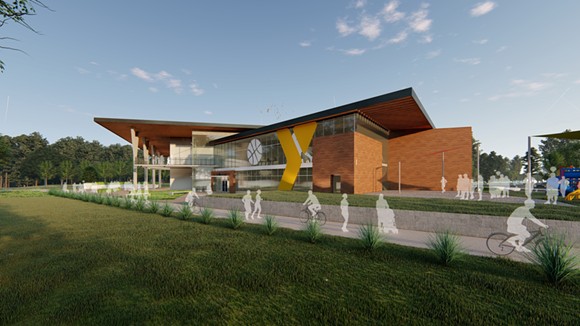 The new YMCA is part of Dr. Phillips Charities' planned 202-acre, $480 million neighborhood project at the intersection of Princeton Street and Orange Blossom Trail near College Park. Plans to undergo the project were announced in November, and Dr. Phillips Charities originally donated $8.9 million to begin its development.

"Within The Packing District, we imagine a live, work, play environment, and the YMCA Family Center is a beautiful fit for that vision," says Ken Robinson, president and CEO of Dr. Phillips Charities. "We're proud to collaborate with another like-minded organization focused on the benefit this project will bring to the citizens of Orlando."

Construction is expected to break ground later this year or early next year.

The grand opening is scheduled for sometime in 2021.