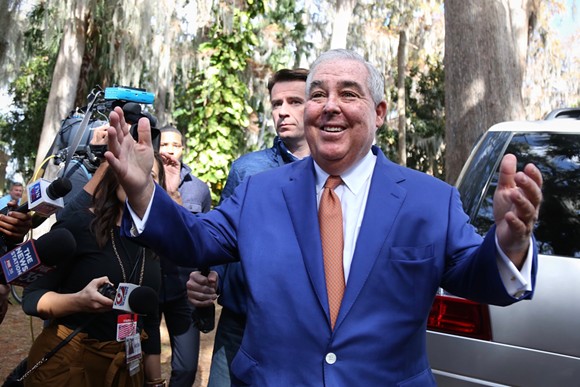 John Morgan is on a mission to raise Florida's minimum wage to $15 an hour, and while this may be long overdue, the outspoken Orlando attorney has struggled to lead by example with his own business ventures.

Morgan has personally pledged to spend $1 million on his latest political committee, Florida for a Fair Wage, but while doing so, his law firm Morgan & Morgan is reportedly relying on third-party call centers that pay employees wages ranging from $12 an hour to as low as $600 a month.

Since at least November 2017, Florida-based Office Gurus has taken on Morgan & Morgan as a client, and is currently handling an undisclosed volume of calls for the firm.

It's tough to argue that call centers aren't a major component for Morgan & Morgan – just about every single television ad, radio spot and billboard features the famous "For the People" slogan, and a cue to call his 1-888 number.

However, over a dozen calls from Creative Loafing: Tampa Bay to Morgan & Morgan’s toll-free number were routed to the Seminole-based Office Gurus location. Reading from their script, every employee answered the phone with the same line of "Thank you for calling Morgan & Morgan, your call is being recorded for quality purposes. My name is ____, how can I help you?"

When asked if this was an Office Gurus call center, the answer was always "yes."

A current employee at Office Gurus in Seminole, who wished to remain anonymous out of fear of losing the job, told Creative Loafing that the call volume has at least doubled since taking on calls for Morgan & Morgan, and the company has had to hire new employees to handle the workload.

"I answered 150 calls myself the other day and I wasn’t even the highest on that list," said the employee. "We are told to always say we are located in Orlando even though we aren't."

On the Office Guru website, the company says their aim is to "become an extension" of their "client's culture, mission and values in both our nearshore and Florida call centers." While giving the illusion of reaching business like Morgan & Morgan, calls to Office Gurus are routed through their headquarters in Seminole, Florida, as well as call centers in El Salvador and Belize.

According to current job postings, employees at the Office Gurus location in Pinellas County earn roughly $12 an hour, while employees at the offshore offices in El Salvador make between $600-$750 a month, which is equal to roughly $7.50 an hour, or nearly $1 less than Florida's current minimum wage of $8.46.

"The work coming in has drastically increased and they are extremely strict now running this center as they would one of their own centers," said the employee, who pointed out that Joanne Vasquez, a manager at Morgan & Morgan, was brought in to oversee the partnership with Office Gurus. Other upper management includes Grace Ogrodny, who states on her Linkedin profile that she's the "Team Lead for Morgan & Morgan" at Office Gurus.

While Office Gurus appears to be heavily involved with Morgan's call centers, his law firm is not entirely reliant on the company. Recent job listings show positions for "Intake Specialists" at call centers in Longwood and Tampa that are directly owned and operated by the firm, and are also jobs that Morgan has previously stated make $15 an hour.

In other words, when you call Morgan & Morgan you may get an employee who makes $15 an hour, or you may get someone who does the same job for considerably less, a juxtaposition that apparently is not going over well with some Office Guru staff.

"I believe [John Morgan] has moved through this third-party company so his employees don’t have to get raises. Seems like a loophole to me," said the employee.

Shealynn Magent, a former Office Gurus employee who worked at the Seminole office from November 2017 to December 2018, also confirmed that the call center has drastically changed after the Morgan & Morgan calls started coming in.

"They hired people specifically to lead this new campaign," said Magent. "We went through a weeklong training session with the Morgan & Morgan people, and they gave us general scripts and an expectation of what kind of calls we'd get. Once it started it was insane. On our busiest times we were getting nonstop calls. As soon as we hung up a call we'd get another call."

Magent told Creative Loafing that she has nothing but respect for Morgan & Morgan, but was highly critical of the Seminole-based Office Gurus call center. "We would try to raise awareness of issues, and they would get pushed under the table," said Magent.

"At one point I had to go to the hospital, and they told me I'd be fired if I left. I was then told to 'pep it up on the calls,'" claimed Magent.

Magent also noted that no one got any raises while she was there. "They screwed over a lot of people," she added.

A spokesperson for Morgan & Morgan told Creative Loafing that essentially they rely on third-party vendors for overflow, and what Office Gurus pays their employees is out of the law firm's control.

"We are hiring as fast as we can to handle all the call volume we receive," the Morgan & Morgan spokesperson said. "We rely on vendors for our overflow, which pay well more than $15/hr, and we'd prefer to hire more internally. We recently opened another location to handle all the increased volume – we can't hire fast enough, and we'd like your readers to know that we're hiring starting at $15/hr."

Creative Loafing reached out to Office Gurus multiple times for comment and will update this post if they respond.

Morgan himself has had harsh words for businesses that rely on cheap labor. At a press conference last January announcing his goal of collecting enough signatures to get the measure on the 2020 ballot, Morgan passionately accused businesses that pay employees less than $15 as taking advantage of "slave labor."

"There's nothing more profitable than slave labor," said Morgan. "Our belief is that the single greatest issue facing America and Florida today is a living wage. That people are working harder and harder and getting further and further behind. That the rich are getting richer and the middle class is sinking into the abyss."

The committee was launched on Oct. 1, 2017, which is noteworthy because Morgan’s relationship with Office Gurus started in November, which was also one month before he agreed to boost his own employees' wages at his law firm, though he did this following heavy criticism from Orlando Weekly for not paying his own employees $15 an hour.

"If you want to play gotcha with me," Morgan told Orlando Weekly at the time, "a better place to look is WonderWorks where I don’t pay $15 to [my employees]. But I would be happy to if my competition did."

Since making that statement, Disney announced plans to boost their starting pay of some employees to $15, and Universal and SeaWorld have both announced pay increases. Morgan has not said whether not he’ll raise the pay of his employees at his Orlando-based attraction WonderWorks.