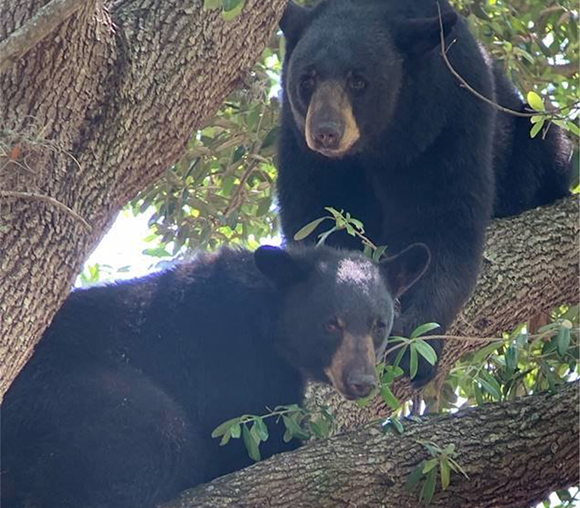 Two black bears are currently hangin' out on a tree at the Orlando Science Schools campus off North John Young Parkway.

The charter school's executive director, Yalcin Akin, says on Facebook that the "mommy bear and her cub" stopped by the school's high school and elementary campus parking lot this morning.

"They climbed up one of the trees and have been there since this morning," Akin says. "The wildlife protection officers and the Orlando Police Department are present and they made security [perimeters] around the parking lot. The bears are not a threat to the school and students and the protection team are watching them."

The Florida Fish and Wildlife Conservation Commission has received reports in the past few days of a female bear and yearling traveling south in Orlando, spokesperson Carli Segelson says.

"This morning they were spotted in a tree 30-40 feet high at the school," Segelson says. "We have blocked off the area for public safety as well as for the safety of the bears and will continue to monitor the situation."

The FWC is also setting some traps at the base of the tree in hopes that the bears will come down this evening.

"These bears are exhibiting natural and normal behavior by climbing the tree to avoid danger," Segelson says. "Since they do not appear to be habituated to people, they will be relocated to a more appropriate location if captured."

The FWC adds that as temperatures rise, black bears in Florida become more active as they search for food.

Out of caution, the Orlando Science Schools have canceled all physical education and club activities and are in a lockout for both the elementary and high school campuses.