Although the Messthetics are a new instrumental band that emerged only a year ago with a debut album on venerable punk imprint Dischord Records, the D.C. triad arrived packing the preceding, built-in kind of cred you get when you feature Fugazi’s rhythm section.

But don’t get too starstruck and discount guitarist Anthony Pirog. If bassist Joe Lally and drummer Brendan Canty are the literal pulse of this band, Pirog is the virtual voice with his extraordinary playing.

The Messthetics, unsurprisingly, feature the stylistic daring and technical rigor you’d expect from an ensemble that’s two-thirds Fugazi. Their sound is a jazz punk jam that’s broad in scope, from exploratory post-rock to power-trio rock of real intellect. Live, they benefit greatly from a much more pronounced punk edge and forward drive. The star rhythm section of Canty and Lally was, expectedly, both locked and propulsive. But Pirog’s swashbuckling lead work was shining, defining.

The Messthetics are unapologetically a musician’s band. But on stage, they rock the academics with such release and power that it never feels stilted or didactic. The effect is a honed machine of charged discipline, balancing soaring spirit and technical wizardry like a Blue Angels routine. Many probably came to bask in the presence of legend, but likely all left with fresh faith.

Notable opener Mary Lattimore is the most indie harpist alive, possibly ever. Not that there’s much competition, but still. She’s been coming through Orlando with acts like Parquet Courts and True Widow. And her collaboration list – studded with names like Jarvis Cocker, Sharon Van Etten, Kurt Vile, Thurston Moore and, most recently, Superchunk’s Mac McCaughan (with whom she just released an EP) – is just sick. No, not your typical orchestra act, her.

What this tack has done in effect is place her on the edge of both genre and scene, pushing the edge on two simultaneous fronts. With each transfixing performance she does in a rock club, Lattimore is at once ambassador, missionary and revelation. 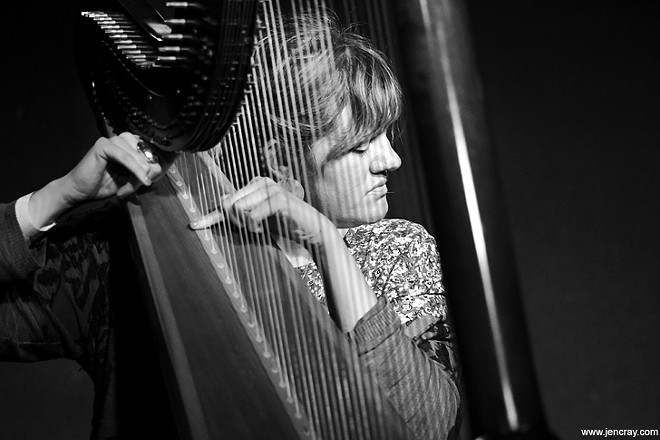 Furthering her finger work with experimental techniques like effects and loop-layering, her music is beautiful in ways objective but not necessarily conventional. This latest performance was possibly the most openly lovely set seen here yet, an idyllic oasis of sparkling ripples that’s especially gorgeous set against her perpetually unlikely backdrop. Even so, her harp vocabulary remains so expansive and liberal that it transcends the perceived bounds of this hallowed but marginalized instrument.

Also, the celebrity sighting of BMX god Mat Hoffman at the show certified Will’s Pub as a clubhouse of legends for a night.