In a head-scratching move, it looks like Disney might be adding an adult-only Beauty and the Beast bar to the Grand Floridian. The new bar would replace the popular but dated Mizner's Lounge on the second floor of the main building.

Mizner's has been a favorite spot for those looking to sneak away from the Magic Kingdom and relax in a genuinely adult space for a while. The small bar has large windows that fill the space with natural sunlight while providing views of the manicured gardens of the Grand Floridian. The menu and décor reflect the early 20th Century focus that the hotel at large is designed around. 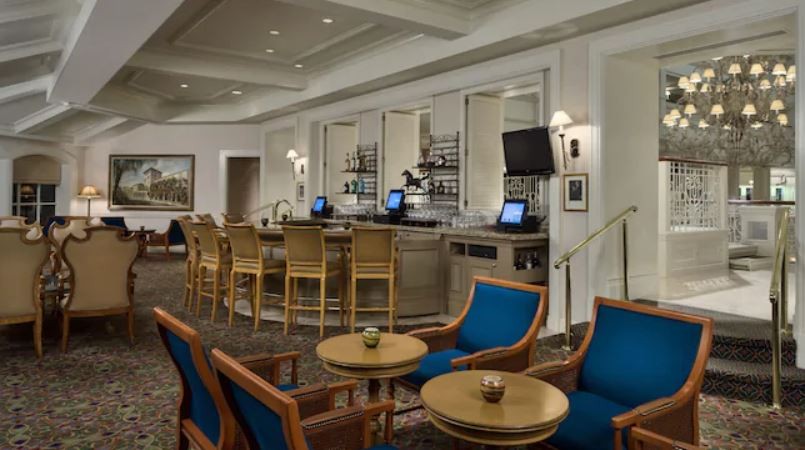 If the latest rumors are correct, all of that theming would be thrown out of those large windows and instead replaced with yet-another themed space that has little to do with its location.

The rumors of the Beauty and the Beast redo were first shared online by Mizner's regular and likely the bar's biggest cheerleader, Twitter user @SchuckJH. His reports of the live action Beauty and the-Beast themed bar were later confirmed by others who have inside knowledge of the resort's plan.

According to SchuckJH and others, the bar and nearby men's store, Commander Porter's, will both be closing to make way for the new lounge that will also include a new outdoor space. The much larger venue will be broken into three areas. Mizner's will be "The Library," drawing inspiration from this important room in the 2017 film, a fireplace and plush couches will adorn the room. Next door Commander Porter's will become "The Ballroom" with a chandelier and other flourishes found in the much larger space seen in the film. Finally, the hallway and outdoor area will become "The Woods," themed to the dark forest that plays a crucial role in the film. The Grand Staircase will also be integrated into the new space.
Altogether, the updated lounge will have around 140 seats with eight cocktail servers and two bartenders. SchuckJH notes that a third bartender may be added if needed.

The odd move to add a French story from the 1700s to a turn of the twentieth century Florida-themed hotel is just the latest such move for Disney. In the DVC wing at the Grand Floridian sits a fountain themed to the decidedly English Mary Poppins. More recently, the Wilderness Lodge, themed to Pacific Northwest, saw its main dining venue redone with a Snow-White theme and character dining experience.

These types of inconsistencies are nothing new for Disney. Aladdin has been meeting guests in Epcot's Morocco for years despite the character technically being from the Middle East while at the Caribbean Beach Resort a new restaurant named after a character from The Little Mermaid, Sebastian's Bistro, serves seafood, seemingly serving up his former friends in the process. Then there's Sunset Boulevard in Hollywood Studios where, as one Twitter user recently put it, "a 1950s Hollywood-themed street with an abandoned hotel on the end that leads to a modern day music studio in Los Angeles that's just beyond has an art deco-themed building with a racing car inside of it from a universe that humans shouldn't even be in."

The new Beauty and the Beast bar is surprising for other reasons as well. Mizner's serves as the lobby bar for Victoria and Albert's, one of the only five-star dining experiences in the entire southeast, and sits in what is often called Disney World's flagship hotel, one that is far more mature than their other resorts.

Despite these concerns, it looks like Disney is moving forward with shoehorning this new bar into the Grand Floridian. Mizner's and Commander Porter's will both be closing later this week. In the meantime, temporary bars will be set up on the ground floor of the lobby. The Grand Floridian Society Orchestra will also be temporarily located to the ground floor beginning this weekend as their second-floor bandstand will be remodeled as part of the updates. The new bar will open this fall.