This event was the home stretch of an ambitious string of live showcases for Illuminated Paths. Across six shows in just the span of a month, the preeminent Oddlando music label – and mini scene unto itself – has been shedding brilliant weirdness all over town from Mills 50 to downtown to now the Milk District. 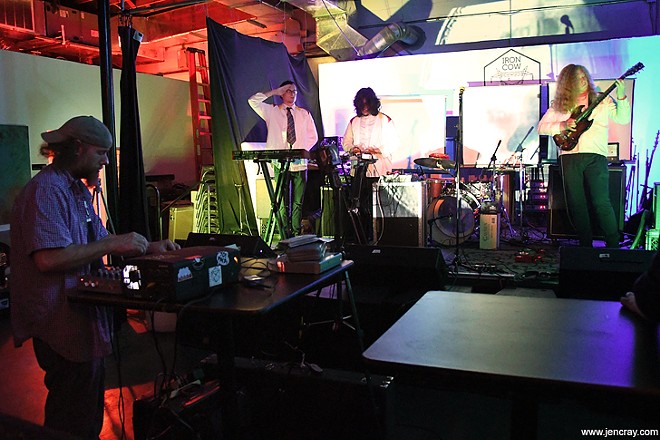 As usual, the stage was bathed all night in the trademark live-mixed visuals of Broken Machine Films (the video guise of label boss Joshua Rogers), which make these IP/BMF events always feel, aptly, like deep dives into the electronic psychedelic underground.

This edition ranged from the fried garage rock of Orlando's Bobby Clock & the Soda Pops to the left-field rap of Ohtwo to the industrial noise bleeding of Melbourne's Sombir, who opened with a static-drenched cover that was essentially the Psychedelic Furs fed through a blender. There was even a brief surprise set by IP fixture and mover Ray Brazen.

But some of the brightest color of IP's latest live kaleidoscope came from local band TTN. They're an industrial act, which you could probably induce just from their song titles, which read like a mixtape of lost Front 242 and Skinny Puppy tracks.

Unlike those acts, however, this mostly instrumental group are definitely rock-forward with an aggressive, near-metal guitar lead atop noisy tones and some pounding electronic rhythms. They're surprisingly live and human for an industrial band (with electronic beats played by hand even), which keeps things decidedly raw. Add in a sense of show and you've got a promising act.

Oh, but speaking of showmanship, Danny Feedback delivered the night's most all-out performance. This OG of the Orlando freak scene has been more or less focused on his warped Crack Rock Opera production for the better part of this decade. This trio performance, however, was stripped back to original basics. And frankly, this is his best element.

Free of the straitjacket of any grand concept, Feedback's defining rock kink runs flamboyant and wild. And this set was a long-awaited return to that genius form and a recertification of Danny’s historical cred as a true Orlando original.

Not that you need anything more than his gloriously bent heroics, but the band did come complete with wardrobe, which in their hands was like some Partridge Family subversion. Also, fog, motherfucker. It all amounted to a bolt from the frenzied psychedelic fringe.