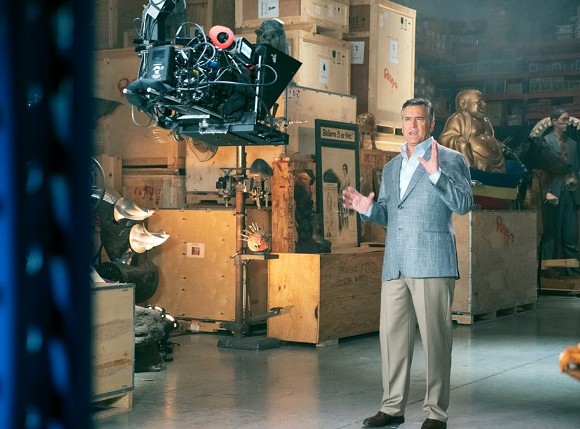 Ripley Entertainment is known for their wild and wacky exhibits at their "odditoriums," but the Orlando-based company is far more than just a collection of unique museums. The global brand has more than 100 attractions in nearly a dozen countries and sees more than 14 million guests per year.

Despite this, one of the most recognized parts of the company remains the television series that founder Robert Ripley began in 1949 (Ripley abruptly died shortly after filming unlucky episode 13 of the original series on which he had discussed funerals). Since then two remakes and an animated version have all been created. Now, 16 years after the last Ripley's show stopped production, a new series is about to debut.

Horror icon Bruce Campbell will host the upcoming "Ripley's Believe It or Not" series on the Travel Channel. Campbell, known for his role as Ash Williams in the Evil Dead franchise and his lead role in The Adventures of Brisco County, Jr., has extensive acting resume that includes Hercules: The Legendary Journeys, Xena: Warrior Princess, Burn Notice, Lodge 49, Sundown: The Vampire in Retreat and Ash vs. Evil Dead where he reprised his role as Ash Williams.

"As an actor, I've always been drawn toward material that is more 'fantastic' in nature, so I was eager and excited to partner with Travel Channel and Ripley's Believe It or Not! on this new show," Campbell said. "And because amazing things happen all around the world, we should have no shortage of unbelievable stories to share with a fresh new audience."

Previous versions of the show have been filmed in L.A. and New York, but this series brings the action home. Ripley's confirmed exclusively to the Orlando Weekly that production recently wrapped up at their warehouse here in Orlando.

Similar to previous iterations of the show where host Dean Cain or Jack Palance introduce a story using some of Ripley's artifacts, the new show will have Bruce Campbell exploring the vast warehouse that is the real-life version of the Indiana Jones Hanger 51.

Each of the hour-long episodes has Campbell in the Ripley Warehouse in Orlando and then the show takes viewers around the world to explore to stories behind the artifacts. In the first official images from the production shared with OW, Campbell is seen among the thousands of artifacts in Ripley's storage center similar to how Cain was located in the previous version. That previous version was filmed at a separate warehouse of Ripley's in L.A. but featured the original "odditorium" in St. Augustine during its intro. It is unclear if the new show will mention on-screen where it is being shot.

The 10-episode series will debut on Travel Channel this summer.

"Travel Channel fans have an insatiable curiosity about the world and sharing this wonderful and weird series with the next generation of fans is a thrill," Travel Channel general manager Jane Latman said in a statement. "This entirely new version of Ripley's is a fresh contemporary approach to the odd and unusual and will be jam-packed with larger-than-life-characters, cool facts, history science."

More details regarding the upcoming show will be released closer to its debut.