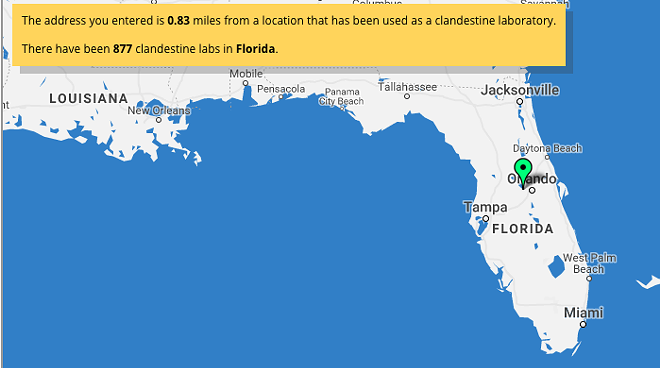 Do you live near a meth lab? A new report from American Addiction Centers says yeah, you probably do.

According to the for-profit rehab company, Florida has hosted 877 methamphetamine manufacturing sites over the last decade, and their new map lets you find out just how close the nearest one is to your house.

Using data from the DEA spanning from 2007 to 2016, the interactive map allows people to see how far they live from places where methamphetamine was once manufactured. You should note, however, that the map only includes locations where a drug bust once occurred, meaning there are DEFINITELY plenty of meth labs not listed.

Related Meth is more potent and plentiful than ever in Florida – and men who have sex with men are poised to take the hardest hit: Speed trap

Though it doesn’t give you an exact address, the map does give you a sense of just how close this danger can be, which is important to know considering meth has been making a huge resurgence in Florida. According to a 2018 report from the Medical Examiners Commission, 464 people died from methamphetamine in 2017, which is a 42 percent increase from 2016.