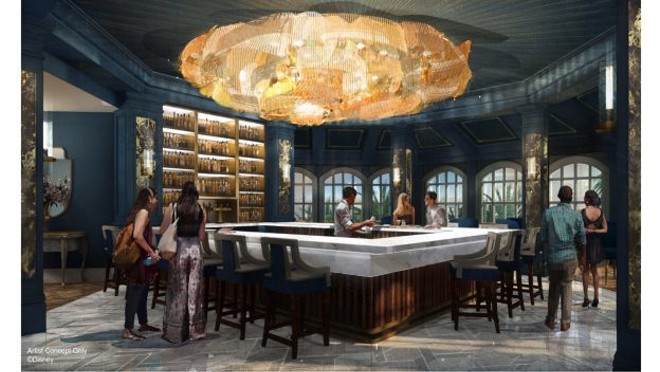 Mizner's Lounge at Walt Disney World's Grand Floridian resort closed earlier this month. At the time it was reported on here that a Beauty and the Beast lounge was rumored for the space; now Disney has confirmed that themed lounge but with a few slight changes.

The ballroom area will be less focused on the room itself and instead find its design inspiration from Belle's dress and, of course, the all-so-important rose. As the Disney Parks Blog explains, "the signature bar will glow from the light of a magnificent gold chandelier that takes its inspiration from Belle's flowing ball gown, with subtle nods to the Beast's magical rose." Next to it will be the library-inspired space that will be filled with French furnishings and nods to the story's other characters.

Unlike previously reported, the final area will be split into two sections with only the interior section being themed to the dark forest seen in the live-action film while the outside patio area will instead draw inspiration from the gardens of Beast's castle.

Concept art released with the announcement shows subtle design touches, instead of the bold designs that are seen in the film. This may help alleviate some of the concerns some fans expressed regarding how a French-themed film would fit into a Floridian-themed resort. But with only one official piece of concept art, there is still plenty of unknowns regarding the design of the expansive new lounge.

The grand staircase and the orchestra balcony, both of which will be updated as part of the new lounge project, weren't mentioned in the Disney announcement. Neither was an opening date, but the project is expected to be finished sometime this fall, likely before the end of the fiscal year in September.